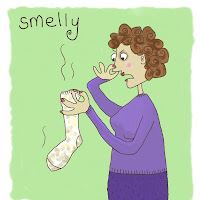 that was looking for a permanent mate, then I sure wouldn’t be taking the pill.

(Sorry for the random non-investment related post, but I have to indulge my biotech background on occasion.)

Studies have shown that individuals prefer members of the opposite sex to have highly different genes that code for the immune system. This makes evolutionary sense, as the offspring will be much more likely to survive with a diverse and healthy immune system. The MHC genes (genes involved in the immune system that they also use for organ matching) can be detected by smell and taste (saliva), and it has been shown in many animal studies (mice, fish, etc) that individuals prefer mates with diverse MHC genes (in humans they are called the HLA genes).

Couples with differing MHC score all kinds of benefits including better sex life overall, higher rates of orgasms for women and a much lower chance of female cheating.

Thus, the famous saying about how chemistry can determine attraction and happiness in a relationship!

Check out the famous 1995 t-shirt smell study by Claus Wedekind for an example (and it works for Brazilians too):

In the first “sweaty T-shirt” experiment, a Swiss zoologist, Claus Wedekind, set up a test of women’s sensitivity to male odors. He assembled volunteers, 49 women and 44 men selected for their variety of MHC gene types. He gave the men clean T-shirts to wear for two nights and then return to the scientists.

In the laboratory, the researchers put each T-shirt in a box equipped with a smelling hole and invited the women volunteers to come in, one at a time, and sniff the boxes. Their task was to sample the odor of seven boxes and describe each odor as to intensity, pleasantness, and sexiness.

The results were striking. Overall, the women preferred the scents of T-shirts worn by men whose MHC genes were different from their own. However, their preference was reversed if they were taking oral contraceptives.

So basically, if a woman is on the pill she is picking the wrong dude.

Not only could MHC-similarity in couples lead to fertility problems but it could ultimately lead to the breakdown of relationships when women stop using the contraceptive pill, as odor perception plays a significant role in maintaining attraction to partners.

“The results showed that the preferences of women who began using the contraceptive pill shifted towards men with genetically similar odors,” Roberts said. Roberts suggests a likely reason for the pill’s effect on a woman’s odor preferences. The pill puts a woman’s body into a hormonally pregnant state (the reason she doesn’t ovulate), and during that time there would be no reason to seek out a mate. “When women are pregnant there’s no selection pressure, evolutionarily speaking, for having a preference for genetically dissimilar odors,” Roberts said. “And if there is any pressure at all it would be towards relatives, who would be more genetically similar, because the relatives would help those individuals rear the baby.”

So why can’t you order a MHC panel and compare your genes with your honey? There are lots of genetic services that will read your genome and comment on health related findings (23andme) or ancestral lineage (National Geographic), but none that would simply type you for compatibility.

The closest company is ScientificMatch who aims to unite people with dissimilar MHC genes. The problem here, in addition to the lifetime $2,000 fee, is that you don’t get the test results yourself. You also have to be single looking for a mate. Interestingly enough, you can’t join the site if you are on the pill. I’m sure a lot of people would love to order a simple online test for MHC compatibility that were already dating. Here is an overview of the academic literature from ScientificMatch (highly recommended reading).

As far as I know, MHCtest.com isnt in business yet. . .although if the government keeps it up, no one will be able to order genetic tests.

Now to put on our Freakonomics hat and take things a bit further, you gotta wonder if the invention of the pill has led and entire generation of women to select the wrong mate? Increases in infidelity, divorce rate, spontaneous abortions, and increased health problems would result. (For a dissenting view, check out the Alas blog.)

I’m sure there are a lot of reasons the divorce rate skyrocketed, but it is still eerie. 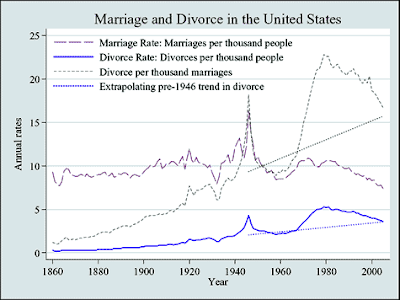 Also reminds me of Michael Crichton’s book Next. Can’t you just picture a lawyer using these findings in divorce proceedings? Kind of a creepy thought.

PS My all-time favorite book has a blurb on the t-shirt study. . .