A reader emailed in asking me if the timing model would work for housing. I actually wrote an article on a beta allocation to housing and/or hedging your home value about a year ago. There are a couple housing ETFs coming to market (UMM – MacroShares Major Metro Housing Up & DMM – MacroShares Major Metro Housing Down.) Currently there are futures trading on housing (although they have really low volume last I checked).

1) Including housing in your strategic asset allocation probably makes sense (possibly as a portion of the real estate allocation).
2) The timing model works for housing as well.

When I wrote the article (June 2007 data), both of the composite indexes were on sell signals. 13 of the 20 cities tracked were on a sell signal already. Had you exited the composite when the model flashed sell (October 2006), you would have avoided the 20%+ decline in home values. Below are the dates (using July 2008 data) for when the timing model would have sold some individual markets:

Here is the equity curve for the timing system on the housing composite back to 1987. This does not include interest on cash balances, which would up the return a bit. Similar to the timing model on virtually every asset class, it is long roughly 70% of the time. 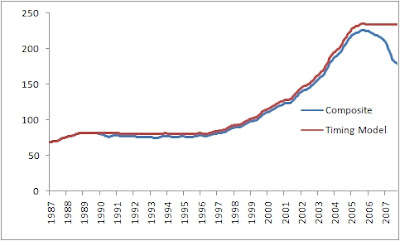