2008 is shaping up to be a terrible year for stocks with most indices down around 40%. It doesn’t do any good to worry about what has happened, but a better question is: what can I do now?
While our flagship model is a very simple trendfollowing system, I spend a lot of time thinking about other systems based on structural or behavioral phenomena. One well documented effect is the historical outperformance for small cap stocks in January. A simple system of holding the smallest 20% of stocks every January since 1927 results in returns of around 10% a year (and that is without sitting in cash the remaining 11 months of the year which would add an additional 3.5% per annum to returns). That dwarfs the 1.5% return for the largest 10% of stocks in January.

Below is a table of the smallest 10% and 20% of stocks vs. the largest 10% and 20% of stocks in January. (I am using the French Fama data.) Note, if you employed a market neutral strategy (long the small caps and short the large caps -denoted “hedged“ in the table), the returns would still be very respectable with zero market exposure. The table excludes the approximate 3.5% per annum cash return the remaining 11 months.

The below chart adds in cash returns to compare investing in the January small cap strategy vs. investing in the S&P 500 total return. Note how consistent the returns have been for almost a century. 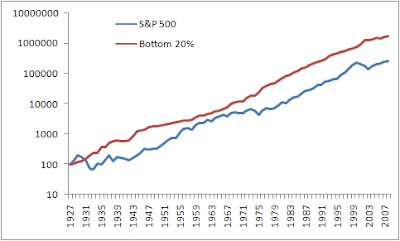 I usually have a hard time getting comfortable with strategies such as this as there needs to be a structural reason for the strategy working. Tax loss selling is a legitimate one as investors sell their losers at the end of the year to capture capital gains losses (and there should be plenty this year).
Another potential problem is data mining. Will the strategy hold up out-of-sample and has the strategy deteriorated over time? Buying the bottom 20% of stocks in January results in nearly 90% up years. 16 of the past 17 years have been positive with average returns of 9.6%. Even better, the strategy would have recorded up years during some of the worst years in the market. 1930: 18.66%. 1931: 23.32%. 2001: up 31.7%. 2002: up 4.8%. The worst January for the strategy would have been around -6%.
Another knock on the strategy is that it would be difficult to implement due the bid-ask spread in small caps. This may have been true historically, but now there are plenty of small cap and micro cap ETFs available the investor can use to implement the trading. The average firm at the bottom decile is about $120 million, but if you back out to the bottom quartile it is a more reasonable $200 million.
What about investing in small cap stocks in January following a terrible year in stocks? In this case I examined all of the years back to 1927, took the 10 worst years in stocks, and examined how small caps (bottom 20% by market cap) performed the following January. The average performance for the S&P 500 the year prior was -21.22%.
The results? An astonishing average performance of 18.17% per January with the worst year being a positive 2.2% (2003). Adding in cash returns the following 12 months and you have returns over 20%.
The average performance of the large caps (top 10%) in January of those years would have been a paltry 3.1%. An investor could either go long a small cap ETF for the month of January, or have a market neutral position with equal amounts long small caps and short large caps. This system (long bottom 20%, short top 10%) would have resulted in average returns of 15% with very little market exposure.
Sample small and microcap funds are PZI, FDM, and IWC. Large cap ETFs include SPY and VTI.