Warren Buffett is one of the most celebrated investors of all time. Buffett learned his craft from his mentor, Benjamin Graham, author of the legendary tomes Security Analysis and The Intelligent Investor. Graham ran his own investment partnership for years, grounded on the concept of buying stocks that were cheap compared to their intrinsic value. He preached about buying securities that had a “margin of safety”. After a lifetime spent studying stocks, Graham stated the following in the Financial Analysts Journal (1976):

In general, no. I am no longer an advocate of elaborate techniques of security analysis in order to find superior value opportunities. This was a rewarding activity, say, 40 years ago, when our textbook Graham and Dodd was first published; but the situation has changed a great deal since then. In the old days any well – trained security analyst could do a good professional job of selecting undervalued issues through detailed studies; but in the light of the enormous amount of research now being carried on, I doubt whether in most cases such extensive efforts will generate sufficiently superior selections to justify their cost. To that very limited extent I’m on the side of the “efficient market ” school of thought now generally accepted by the professors.

And Graham came to this conclusion prior to the advent of the Internet, Bloomberg, and other modern research tools! The efficient market hypothesis (EMT) was certainly making the rounds through academia and the investing public at the time. However, Warren Buffett has famously dismissed the theory, stating, “I’d be a bum on the street with a tin cup if the markets were always efficient.” Would the student be able to prove the teacher wrong?

Buffett’s Chairman’s Letter in the 2007 Berkshire Hathaway annual report indicates that the per-share book value of Berkshire Hathaway has increased at a compounded annual rate of 21.1% since 1965. Compared to an average of 10.3% for the S&P 500 including dividends, the outperformance is astonishing.

For Buffett’s style of value investing to be successful, the efficient market theory must not be valid. Buffett himself has said, “the disservice done students and gullible investment professionals who have swallowed EMT has been an extraordinary service to us.”

While Warren Buffett has practiced some hedge fund techniques such as trading currencies and commodities, merger arbitrage, convertible arbitrage, PIPEs, and private equity, he is known mostly for his equity investments. There have been numerous books that have tried to divine exactly how Mr. Buffett goes about selecting his investments. The American Association of Individual Investors (AAII) and web sites such as Validea.com have developed screens that are designed to find companies that Warren Buffett would buy based on criteria he has promoted in the decades of public speaking, annual reports, and prior transactions. Indeed, some investors simply buy Berkshire Hathaway stock, gaining access to his portfolio management skills, exposure to the operations of an insurance conglomerate, and entree into the Berkshire
Hathaway annual shareholder meeting.

An investor who wants exposure to Buffett’s investing acumen can invest in any of the mutual funds that share the Buffett investment style. When Warren Buffett closed his investment partnership in 1969, he advised his investors to place their money in the Sequoia Fund, managed by Ruane, Cuniff & Goldfarb, Inc. (which reopened in 2008 for the first time since 1985). The Tweedy Browne family of funds are another good example — in fact, the firm was founded by several employees of the Graham-Newman partnership.

But why not just buy what Warren buys? I set out in this writing to examine whether following Berkshire Hathaway’s investments utilizing Form 13Fs could offer the investor the opportunity to piggyback on Buffett’s stock picks, and consequently, achieve outsized excess returns.

Here is the free clone demo on AlphaClone for Buffett’s portfolio. You can go in and play around and test more strategies (how would his portfolio perform if you hedged it 100% with the S&P 500, how would it look if you only took the new buys, etc.)

Following the methodology presented in the previous articles, the following results for the period from 2000 to 12/15/2008 are found below. The Buffett portfolio with 10 long holdings equal-weighted and rebalanced quarterly is compared to the returns to the broad U.S. market (S&P 500). Buffett’s current clone portfolio would be:

The first observation is how dismal the returns have been for stocks this decade. Less than -3% a year with a near 50% drawdown is depressing indeed. (The drawdown figures are currently at a monthly resolution, this will be updated in a future AlphaClone release.)

(There are plenty of clones with much better numbers, but I am using Buffett as an example as most are familiar with him and I don’t want to look like I am cherry-picking a fund.) 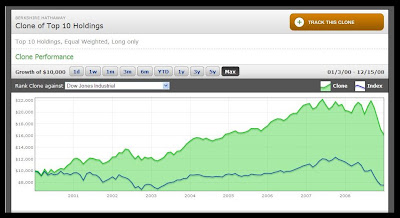 About 85% of Buffet’s portfolio is concentrated in his top ten holdings. Volatility was low, surprising given that the portfolio contained only 10 holdings. If you ran a mutual fund with these numbers you would probably be one of the best performing mangers in the United States over the time period.

A recent academic paper has examined the strategy for Buffett all the way back to 1976 and found results consistent with mine. From the abstract:

Contrary to popular belief, we find Berkshire Hathaway invests primarily in large-cap growth rather than “value” stocks. Over the period the portfolio beat the benchmarks in 27 out of 31 years, on average exceeding the S&P 500 Index by 11.14%. We find that Berkshire Hathaway’s portfolio is concentrated in relatively few stocks with the top five holdings averaging 73% of the portfolio value. While increased volatility is normally associated with higher concentration we show the volatility of the portfolio is driven by large positive returns and not downside risk.

Another simple application is running a hedged portfolio. In this example, I simply use a 50% S&P500 hedge on the portfolio, updated quarterly. (I do not include short rebates which would improve the returns further.) This technique has the obvious effect of dampening volatility and drawdown significantly:

Now that I have shown that the process can work for a single manager, how about a group of custom managers? In Part III we examine a custom “fund-of-funds” approach applied to the progeny of Julian Robertson’s Tiger Management.