I was cleaning out some files and came across the fantastic James Montier PDF “The Seven Sins of Fund Management“. (If you want the Cliff’s note version check out his recent book The Little Book of Behavioral Investing.)

This reminded me of a conversation I had with the Chief Economist of a major I-bank when I just graduated college.  We were out skateboarding (technically on a FlowBoard) down the paved streets of San Francisco.  The FlowBoard allows the user to basically snowboard down paved streets.  We would take a lift (car) back up then skate back down Rivera or Sloate streets.  Pretty amazing and one of those experiences you only get in the Bay Area.  Imagine going skateboarding with the head of Goldman in NYC…

Anyways, one of the simple questions I had was – “If people have such a rotten record of forecasting, specifically, why do we have a Federal Reserve Chairman/Committee adjusting interest rates at all?  Why not simply peg them to some basket of commodities, goods, or other inflation measure.”  He went on an hour long diatrtibe, and that debate is not the point of this post.  Rather, I wanted to point out a few of the great charts from the PDF highlighting the terrible record of forecasting in general.  From Montier:

The two most common biases are over-optimism and overconfidence. Overconfidence refers to a situation whereby people are surprised more often than they expect to be. Effectively people are generally much too sure about their ability to predict. This tendency is particularly pronounced amongst experts. That is to say, experts are more overconfident than lay people. This is consistent with the illusion of knowledge driving overconfidence.

Dunning and colleagues have documented that the worst performers are generally the most overconfident. They argue that such individuals suffer a double curse of being unskilled and unaware of it. Dunning et al argue that the skills needed to produce correct responses are virtually identical to those needed to self-evaluate the potential accuracy of responses. Hence the problem.

Why do we persist in using forecasts in the investment process? The answer probably lies in behaviour known as anchoring. That is in the face of uncertainty we will cling to any irrelevant number as support. So it is little wonder that investors cling to forecasts, despite their uselessness.

The first chart shows economists attempts to forecast the rate of inflation as measured by the GDP deflator. Sadly it reveals a pattern that will become all too common in the next few charts. Economists are really very good at telling you what has just happened! They constantly seem to lag reality. Inflation forecasts appear to be largely a function of past inflation rates. 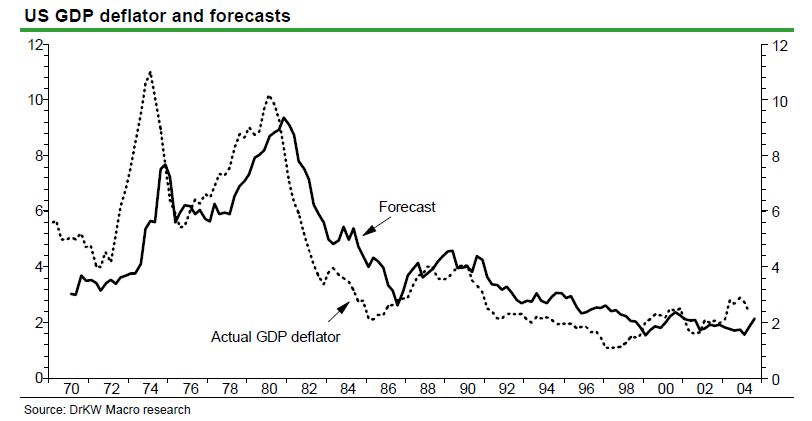 The economists are bad, but what about bond forecasters?

Not only are bond forecasters bad at guessing the level of the yield, they can’t get the direction of yield changes right either. The table below (in PDF) shows that when yields were forecast to rise, they actually fell 55% of the time!

The same thing occurs for both equity strategists and analysts.  So, the question is, why forecast at all?