From a recent article by Mark Hulbert titled “Track Record of the Death Cross“:

Blake LeBaron, a finance professor at Brandeis University who has extensively analyzed various technical analysis strategies including moving averages, says that what’s happened since 1990 raises the distinct possibility that something has permanently changed in the financial markets that largely eliminated moving averages’ potential as a market timing indicator.

Supporting this possibility, according to Prof. LeBaron, is that moving average systems stopped being profitable in the foreign-exchange markets at about the same time they lost their effectiveness in timing the U.S. equity market. This increases the likelihood that whatever caused moving average systems to become less profitable in the stock market was more than just a fluke.

Ownership of personal computers skyrocketed in the late 1980s and early 1990s, and coupled with cheap online databases, those PCs enabled a much larger group of investors than ever before to discover and quickly exploit the moving average. A dramatic lowering in transaction costs at about the same time made it much easier for investors to trade on signals generated by moving averages.

The bottom line? The weight you put on the stock market’s recent death cross depends on whether you think the last two decades are a mere exception to the long-term rule — or if, instead, you believe that something indeed has permanently changed.

It is fairly simple to test this thesis that “moving averages no longer work since 1990”.  Below is a chart of the S&P500 total return vs a timing system that uses the simple 50/200 day SMA crossover mentioned in the article.  The portfolio moves into a Vanguard Bond mutual fund when not on a buy signal.  Transaction costs and taxes are ignored.

As you can see, the conclusions the professor has made are somewhat curious.  It looks like timing improves every metric from CAGR to vol and maximum drawdown reduction.  It also looks like the timing model did an impressive job of sidestepping two devastating bear markets and the psychological damage that causes. (If you have followed the blog for a long time you know that moving average models work to reduce vol and drawdown NOT increase returns.  Other momentum methods, as well as using leverage, can accomplish increased CAGR.)

Long time readers of the blog know that these trendfollowing methods work in other asset classes as well (A Quantitative Approach To Tactical Asset Allocation).  Our second paper illustrated methods that beat buy and hold in over two thirds of all years (with less volatility and drawdown as well) including 15 out of the 20 years since 1990 (Relative Strength Strategies for Investing).

The Death Cross in S&P500 – Bloomberg 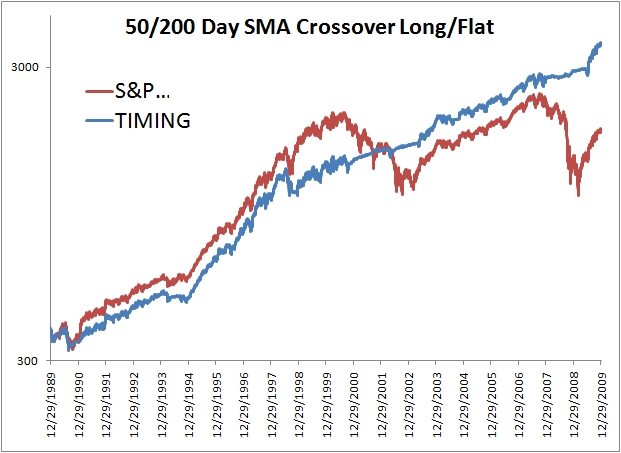