There was lots of news recently centering around PIMCO’s decision to launch an actively traded ETF version of their flagship Total Return Fund.  This is notable as the fund is the largest mutual fund in the world weighing in at $235B.  That makes the mutual fund about 50x bigger than the entire active ETF space is currently.

While notable, I don’t think people realize how big of deal this is.  Granted I have a bit of a bias since I run an active ETF, but note that I also run private hedge funds and separate accounts so I am familiar with all of these structures.  We considered doing a mutual fund as well as indexed ETFs (had two queued up for the fall of 2008 with one of the world’s top media properties to launch on the NYSE before they got cold feet).  Below we take a quick look at why ETFs, and especially active ETFs, are getting ready to take off.

(Note:  I am ignoring the leveraged ETFs and strange derivative/ETN ETFs here.)

The main way investors have invested in funds over the past few decades have been mutual funds, but with the exception of index funds, they have failed the individual investor.  Most mutual funds have too many legacy issues, including:

1.  Multiple share class structure (take a look at Total Returns whopping 8 versions, soon to be 9 all with different price structures.)  Many mutual funds are designed to be sold with massive load charges on the front or back end that benefit the broker but not the investor.

3.  Add in the ridiculous .20-.40% fees to Schwab or Fido for listing on their supermarket and you will see why most mutual funds will eventually lose out to ETFs.  If I’m trying to launch a low cost fund, how in the world can you give away 20-40 bps just for the privilege of allowing someone to buy the fund?  What if you’re trying to launch a fund that charges 20-40 bps total?

4.  ETFs (both index and active) have lower expense ratios than their mutual fund counterparts.  For passive equities they are about half (40-50 bps difference).

5.  The whopper is the the tax efficiency of ETFs.  I don’t think most people REALLY understand the benefits just yet.  If you look at Matt Hougan’s PowerPoint linked below almost zero ETFs make distributions (due to the creation/redemption process) whereas mutual funds receive inflows/outflows daily and may very well have capital gains to pass along even in a year when you lost money on your fund.  (Here is an article that talks about finding mutual funds with embedded losses.)  However, ETFs, due to their unique structure, should really never have any major distributions outside of income from income securities.  That is an enormous structural benefit to ETFs that I really don’t think most advisors understand.

Below is a screenshot from a PPT from IndexUniverse (I asked them to see if they could come up with a figure for % of mutual funds that make distributions/year and will report back).  If anyone knows this stat email me.   The average equity mutual fund loses more than 2½ percentage points of its return to taxes each year: 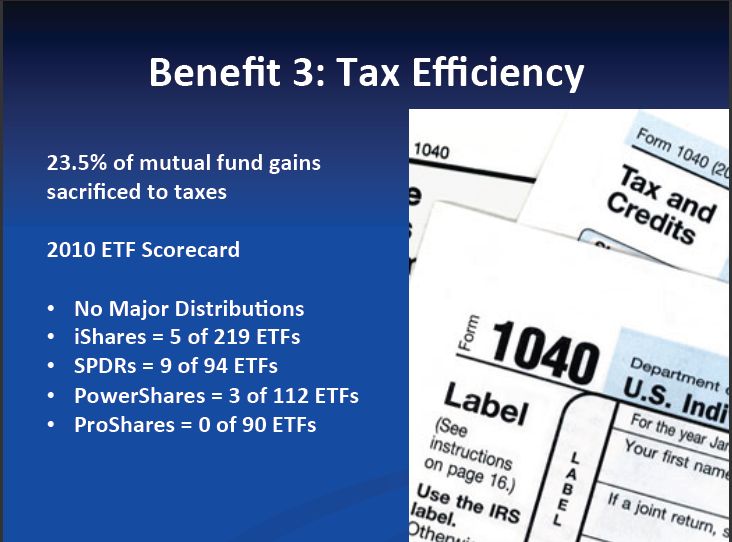 What is more interesting to me is that Vaguard touts the tax efficiency of their mutual funds since they have patented a hub-spoke share class structure that allows them to offload the capital gains onto the ETF which can then offload them in the creation/redemption process.  This is a huge competitive advantage of course against other mutual funds but is already built in to any ETF offerings. (More on their patented structure here and here.)

The foreign listed hedge funds never really got off the ground due to their structure (essentially like closed end funds here).  They could trade at discounts and premiums to their NAV.  Again, 2008 imploded the sector as many of these funds traded at massive discounts as liquidity dried up (not to mention PFIC issues for US investors which render them impossible to invest in).

ETFs have corrected the discount problem with the creation/redemption process. I think you’ve seen the first wave of ETFs that are clearly superior to their mutual fund cousins.  No sales charges, no 12b-1 fees, and most importantly no tax issues.

The big public funds are all rushing into the active space (State Street, Vanguard, Blackrock, PIMCO, etc) but I think this area is going to get really interesting is when the hedge funds start listing:  the Third Points and Greenlights of the world.  Back in 2007 Bill Ackman wanted to launch a public fund.  Exciting times indeed.