With the news that Apple is now the largest company by market cap in the US hitting the wire, analysts should take a look at this older post of ours summarizing Arnott’s research.

Arnott’s monthly letter is a must read.  In the 6/2010 issue, titled “Too Big To Succeed” he examines how the largest market cap company in each sector performs relative to its peers.

(We did some older posts on the subject of the largest company by market cap overall.  The original study was featured in the book “Mosaic: Perspectives on Investing” by Pabrai.)

From these results, one might conclude that an investor could do rather well by investing in the Russell 1000, minus its 12 sector leaders. Better still, perhaps we should exclude all of the companies that have been sector leaders any time in the past decade because the performance drag for the top dogs tends to persist for a decade or more. These stocks typically comprise about one-fourth of the Russell 1000! If these stocks suffer a 300–400 bps shortfall in most years, one could outperform the index by nearly 100 bps per annum merely by leaving the top dogs out, cancelling the corrosive influence of competitors, populists, and pundits.” 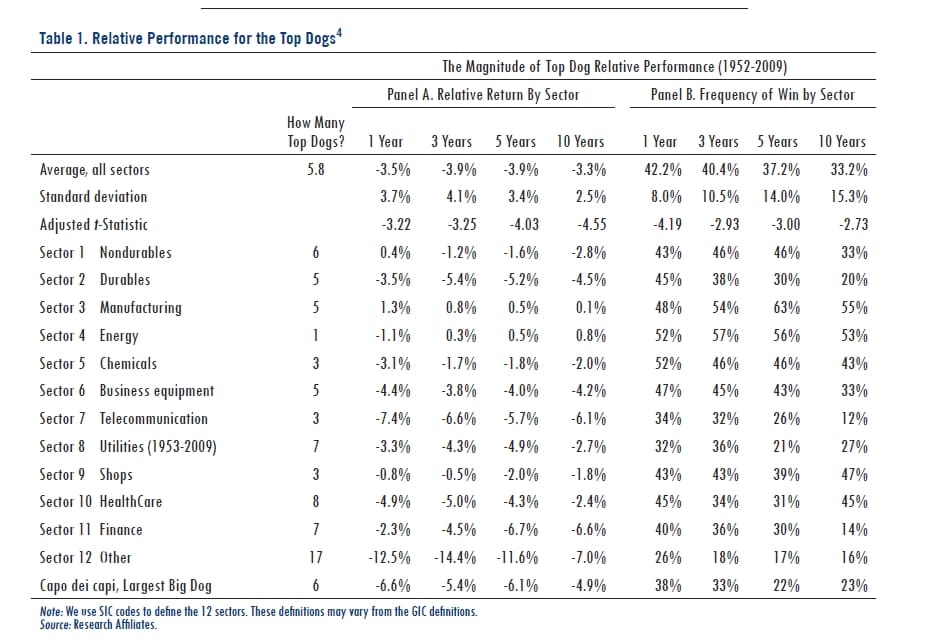 Now, Arnott runs billions on indexes that are not market cap weighted, but the arguement is certainly persuasive.  He also co-wrote the very good book The Fundamental Index: A Better Way to Invest.

Below are the 9 sector SPDRs and their top holding in each: