Long time readers know that I think the singular focus on dividends is one of the biggest mistakes an investor can make when selecting stocks.  With the dividend tax rate set to increase at year end, the US will soon have one of the highest tax rates on dividends in the world at ~45% with the Affordable Care Actand and Pease limitation on itemized deductions.  HT:  Sober Look, JP Morgan 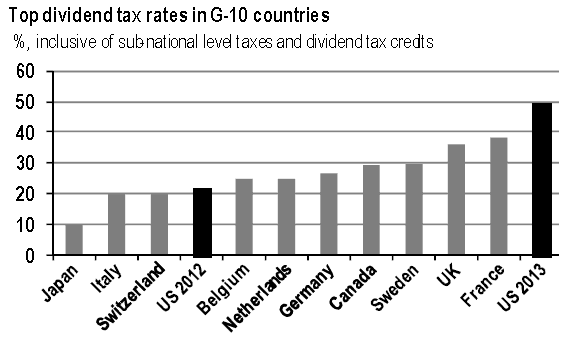 What happens when governements of the world jack up dividend tax rates (especially when they are higher than capital gains)?  No surprise, fewer companies pay dividends, and those that do pay out less in earnings as dividends…

In over half of the past forty years, dividends have been taxed at higher rates than long-term capital gains, with the exception of 1988-1997, and 2003-present.  While this disadvantage was slightly improved by the recent Bush tax cuts, and while there are some foreign countries that do not have inferior tax treatment for dividends, the number of companies paying dividends has, nonetheless, declined from nearly 100% to around 66% for the largest stocks in the U.S.  (Another concise summary of dividend paying stocks is the 2001 French Fama paper “Disappearing Dividends:  Changing Firm Characteristics or Lower Propensity to Pay?”)

A recent paper by Jacob and Jacob (2011), “Taxation, Dividends and Share Repurchases:  Taking Evidence Global,” examines 6,416 companies across 25 countries and find that relative tax rates are hugely important.  They state, “Our results show that dividend and shareholder taxation are important determinants of corporate payout internationally in the past 20 years. In countries and years in which dividends are taxed favorably relative to capital gains, firms are more likely to pay dividends, and the amount of dividends is greater.  Conversely, in countries and years in which capital gains receive preferential tax treatment over dividends, firms are more likely to repurchase shares to pay out cash to investors.” 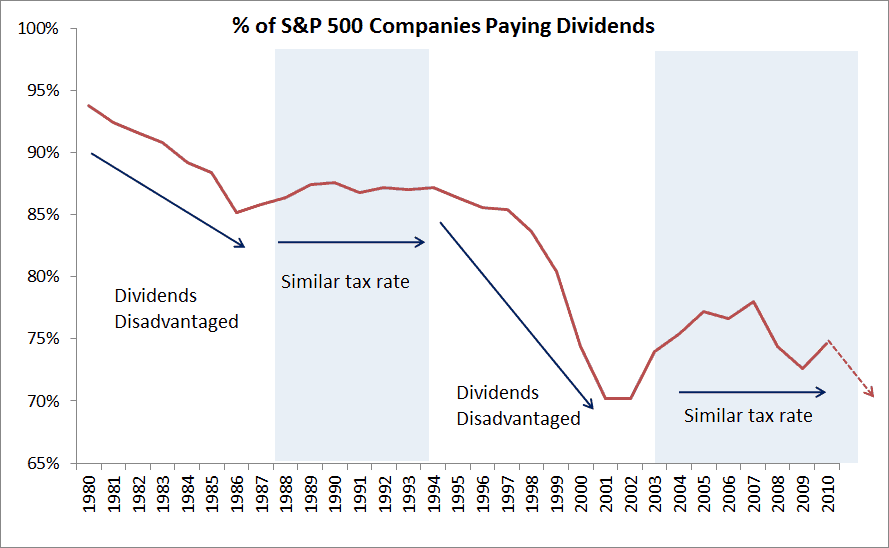 A more holistic approach to investing based on various routes of distributing cash flows (commonly known as shareholder yield)  makes much more sense to me, and has historically beat the pants off any dividend strategy.  Check out my friend Wes’s paper, and hopefully soon our book (Nov 1?). 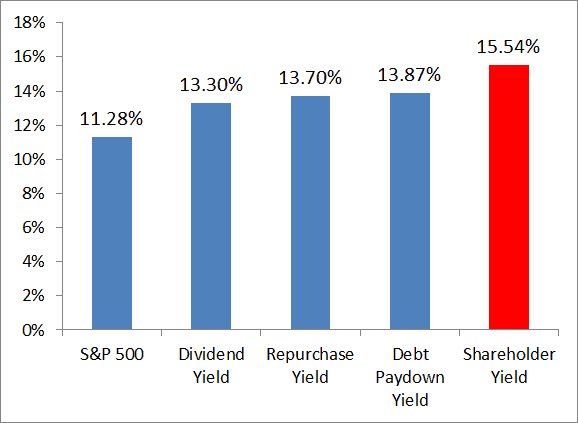