One of the more interesting debates regarding stock valuations is the state of profit margins.  One one side you have Hussman and GMO lining up, and on the other Siegel and Redleaf.

I’m on the side of the former, and this is one of the reasons we have moved the majority of our equity allocations to foreign markets (valuations being another).

Below is the chart of profit margins and future profit growth from Hussman:

“What’s going on here is that profit margins have never been wider in history. But profit margins are also highly cyclical over time. The wide margins at present are partly the result of deficit spending amounting to more than 8% of GDP – where government transfer payments are still holding up nearly 20% of total consumer spending, and partly the result of foreign labor outsourcing (directly, and also indirectly through imported intermediate goods) which has held down wage and salary payouts. Indeed, the ratio of corporate profits to GDP is now close to 70% above its long-term norm.

Now, if you look at the red line (right scale, inverted), you’ll notice that unusually high profit shares are invariably correlated with unusually low growth in corporate profits over the following 5-year period. Thanks to continuing deficits and extraordinary monetary interventions, this effect has been largely postponed in recent years, allowing profits to expand to present extremes. We are not arguing that profit margins necessarily have to decline over the near-term, and our concerns don’t rest on the assumption that they will. It is sufficient to recognize that the bulk of the value of any stock is not in the early years of earnings, but in the long tail of future cash flows – especially if payouts are low. Stocks are essentially 50-year instruments here in terms of the cash flows that are relevant to their valuation. There are a lot of factors and quiet math that affect the P/E multiple that can be appropriately applied to earnings. Slapping an arbitrary multiple onto elevated earnings reflecting extraordinarily inflated profit margins ignores all of it.”

Montier chimes in with his article What Goes Up Must Come Down:

“Clearly the fi rst two elements of Exhibit 2 are all about cyclical adjustment: we are assuming that the market goes to a “normal” P/E based on “normal” E. Therefore, it is no surprise that we see the same point from a different perspective when we look at a comparison of the simple trailing P/E using the Graham and Dodd P/E (Exhibit 3). The latter tries to smooth out the business cycle’s impact upon earnings by using a 10-year moving average of earnings. Hence, differences between the two measures are a statement of how far earnings are from their “trend.” The simple trailing P/E is around 15x and the Graham and Dodd P/E is around 24x, again highlighting the divergence of profits from their long-run normal levels.” 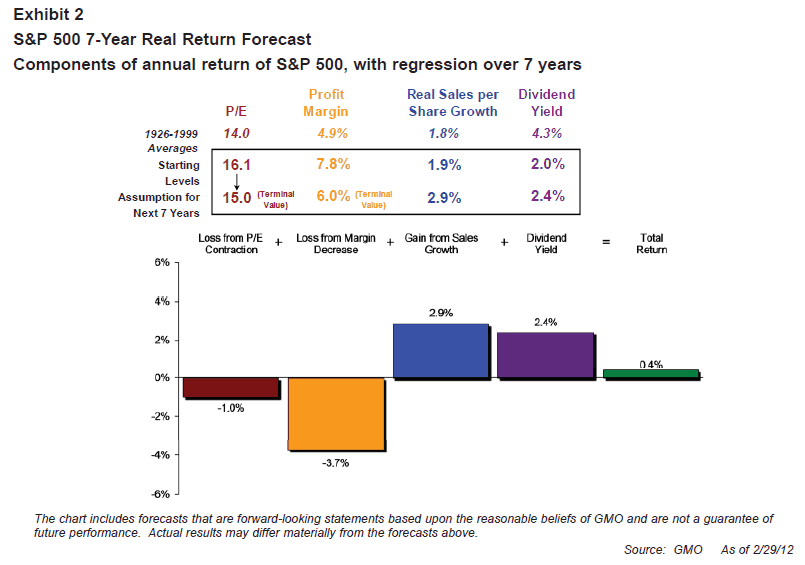 On the other side of the aisle is Siegel from Advisor Perspectives:

Another is the growing importance of technology sales, which automatically have higher margins because of the way accountants expense R&D. It looks like they’re getting higher margins because of the fact that so much of their cost structure is in development costs.  It looks like their margins are high. Technology is going to continue to be a strong part of the S&P, so I don’t see that reverting to mean nor do I see foreign profits reverting immediately to the mean.

So I’m very skeptical that we’re going to get a big reversion of profit margins to the mean.  They’re high, and they’re going to stay higher than normal. Corporate profit as a percent of GDP is distorted because more firms are being classified in the corporate sector and less in what’s called proprietors’ income or private income. The return on total capital, both public and private, is not rising as a percent of GDP. What we see rising as a percent of GDP is corporate, because more firms are incorporating and we have less proprietors’ income than we used to in the economic data.”

Below is a chart from JP Morgan on % foreign sales from their very good Guide to the Markets: 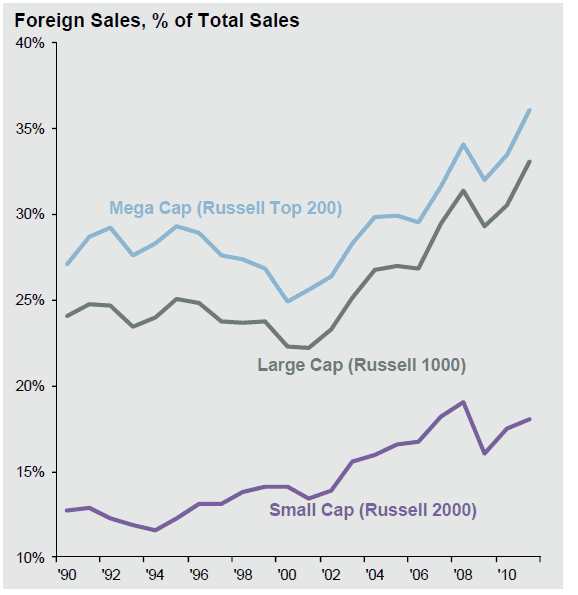 Redleaf of Whitebox (one of my favorites) also touched on the topic in July (hat tip PMJAR):

because it was typical macroeconomics. Macroeconomics arguments are based always on a “circular
#ow” account of the economy. The circular #ow describes the normal roundabout of making
and trading, getting and spending, and all the other clearly “economic” activities of a society
governed by ordinary economic motives and disciplined by generally recognizable price signals.
The circular #ow describes not “the society” but “the economy” which consists of “markets”
tending toward equilibrium. Circular #ow arguments are thus almost entirely useless for analyzing
fundamental economic change because as Schumpeter showed every important “development”
in the economy, every change of note happens outside the circle, indeed outside the economy
in the conventional sense of that term. If anything really is di!erent “this time” no abstraction of
the circular #ow will tell us about it.
Still, as silly as I found the Montier piece his core point—that we should expect mean
reversion—generally holds. A man can write thousands of words of nonsense and yet end his
treatise with the simple phrase “expect reversion to the mean” and still prove a sage.”

He goes on to talk a bit about labor compensation as a % of output, and here is a good piece by the Cleveland Fed: 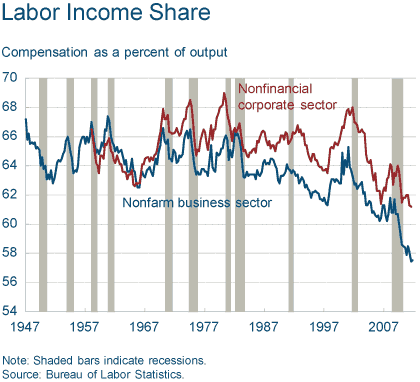