There are lots of cliches you hear when people are discussing dividends and buybacks.  Realize one of the biggest benefits of including net buybacks in your calculation rather than dividends alone is not necessarily including the companies that are reducing share count, but also avoiding the companies increasing it.

I ran a quick screen on the S&P500.  Of the 20 highest dividend yielding stocks, FIFTEEN had share counts that were increasing!  In some cases the share count swamped the dividend yield, actually turning the total amount of cash returned to shareholders into a negative number.  This is sort of a silent but deadly killer.  Investors think they are getting a nice return of cash, the really they end up owning less of the business.  Of the 30 worst companies with the biggest increases in shares outstanding, 18 had dividend yields over 2%.

Below is a simple graph of the stocks in the S&P with mkt cap weighted yields on the vertical axis. 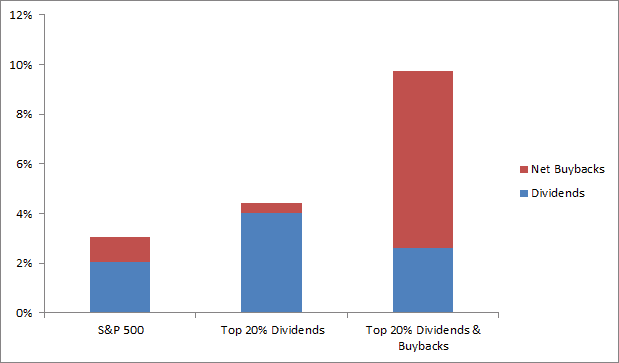