Jeremy Siegel talks about CAPE in a recent FT article.  He has a few criticisms, but misses the bigger picture in my opinion.

They use the MSCI earnings index that doesn’t include the writedowns and they come to the same conclusions as using the S&P series.

2.  CAPE isn’t really a short term timing measure for one market.  Like most valuation measures, it’s not that helpful telling you what to do for the next 6 months.  It makes much more sense to align the indicator with your holdings period.  Here is a post we did – Broadening the Window.  However, pretty much every value measure we track aligns to say the same thing – US stocks are expensive.

3.  But the biggest point that he misses, is that in a global world why focus on just the US?  There are well over 40 investable countries in the world, why just settle for one?  We have shown numerous times that selecting countries on a relative basis on CAPE works great to not only pick winners, but also to avoid the bubbly losers.  And according to CAPE, the US is the second most expensive market we track right now…and according to 1 year PE, it is the 4th most expensive…and according to P/B…etc

If you do a composite across 10PE, 1PE, FCF, P/B, and dividends…the US is still the 4th most expensive…

4.  Note the potential for margin mean reversion in the below chart from the SocGen piece….which side would you rather bet on? 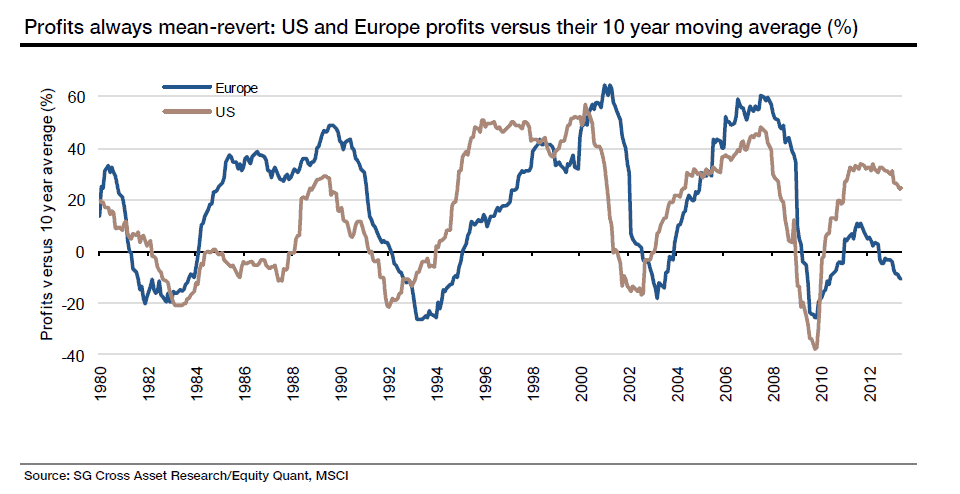 Conclusion from Lapthorne at SocGen:

“At the peak of the cycle, when profits are far above average and the economy is doing well, it is hard to imagine earnings collapsing back below the average, as it is to imagine a depressed region recovering. Mean-reversion in earnings, though sometimes delayed, is as undeniable as the economic cycle itself. Cyclically adjusted (or trend) PE calculations will always give a conservative valuation estimate. But that is exactly the point of valuation – to offer a degree of safety (a margin of error) and to smooth the dangers of the economic cycle. That peak profits typically accompany peak valuations only reinforces the point.

Most significantly, the downside risk of investing when earnings and valuations are far above historical averages should not be underestimated.  from our work, peak earnings go hand-inhand with peak valuations. When earnings revert back to mean (and below), the valuation will also collapse. That many continue to argue against this, and so soon after the collapse of 2008/09, is something we find quite remarkable. “