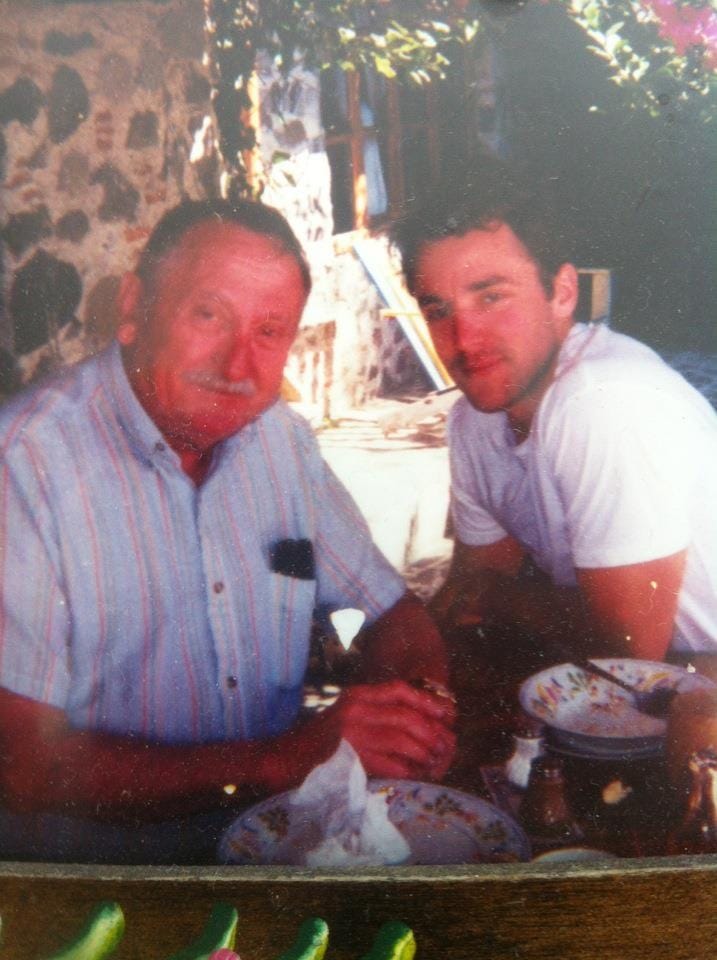 This is one of my favorite pictures of Dad and I, having breakfast on the shores of Lago Atitlan in Guatemala.

I have always loved New Years Resolutions.  That doesn’t mean I have always been able to keep them of course, but the idea of optimism, renewal and committing oneself to self improvement has always appealed to me.

Previous years have included resolutions such as “Just say no” – meaning, trying to focus on the important things, and reducing the clutter and constant distractions of phone calls, meetings, unnecessary travel, etc (this one was kept and really helpful.).  Last year’s was “ski at three new places” (this was accomplished by March: Crested Butte, CS Irwin, and Alta).  Another year was “try a new obsession every month”, like becoming immersed in Japanese, learning Salsa, etc.  This one didn’t work I think mainly due to lack of planing of the obsessions ahead of time – perhaps in a future year – it’s like 12 mini resolutions all in one.

My 2014 resolution was “take matters into my own hands”.  This one sounds a little cheesy, but was meant to be in the general theme of “take charge” or “just do it!”.  I have lots of goals for 2014 including launching new funds, publishing three new books, skiing in Japan, taking Mom to Bhutan, and some other fitness and personal goals, and wanted to make sure that I made a concerted effort to take control of my life’s trajectory instead of getting caught up in the minutiae.

On January 1st my father unexpectedly died of a heart attack.

With one phone call my entire life was thrown upside down.  The concept of being in charge completely disappeared – any illusions of control were shattered.  While our family has rallied together from all over the country, it has been the hardest day.week.month of most of our lives as our father was more than a father , but also the patriarch, and to me, a best friend.

Despite writing over 1500 posts, I tend to be a private person – but I wanted to try and make my best effort at honoring the man than was and is the main mentor and model for why and how I became an investor.  There’s no investing advice or market calls in this post, but perhaps a look into a lot of the formative experiences and reasons behind the other 1,500 posts…and why, even though this is an investing blog, the main Mallory quote on my About page is :  “And joy is, after all, the end of life. We do not live to eat and make money. We eat and make money to be able to live. That is what life means and what life is for”

My father grew up very poor on a farm in Nebraska.  By poor we are talking a house with dirt floors, no running water, an outhouse, and he shared a bed with his younger brother through high school.  When the family eventually moved into “town”, my grandfather, who drove oil trucks, wouldn’t use the bathroom in the beginning because he didn’t like the idea of people doing that inside the house!

Dad and I used to sit around, usually with a glass of port, listening to him tell stories of his childhood and growing up on the farm.  What always impressed upon me was despite the financial challenges and lack of material items, he grew up happy and never expressed any regret for his childhood, but rather genuine fondness for that time.  He still went fishing and hunting and played baseball – he just couldn’t afford to buy a Coke or ice cream afterwards like the other kids.

However, not having the freedom from financial worries definitely had a major impact on Dad.  He excelled at school (many would say, including myself, that he was the most brilliant man they ever met), and one particularly interested teacher helped motivate him to be the first in his family to goto college.  He studied engineering at Nebraska, and to pay for school then served in the military.  This soon became another major influence, as the rigid management structure of the military didn’t appeal to him – especially having to take orders from people he didn’t agree with.

Dad then went on to grad school at Colorado (and later on, Harvard).  A true rocket scientist, Dad worked at Martin Marietta and the successor Lockheed Martin, eventually leading projects overseeing thousands of people and hundreds of millions in revenue.  When we used to go on horsepacking trips with other Lockheed guys I loved listening to all of their stories sitting around the campfire about their projects with names like Atlas and Viking (and this is one reason I started out in aerospace engineering).

When going through his files the past few weeks I found his top secret application and more than one striped top secret document (obviously I shredded them if you are reading this NSA).  Often interspersed within those files would be pictures, drawings, or letters from his family and three boys.

This self made man never forgot where he came from, and this had a major influence on his personal finance (frugal for himself) and investing behavior.  Dad kept everything – there are brokerage reports from the 1980s (Dean Witter!) as well as hand drawn stock charts and other notes – all with meticulous writing on block engineering paper.

He also kept all of the letters anyone ever wrote him.  We used to talk investments and stocks – I found two handwritten letters from when I was 11 where I recommended we buy McDonalds, Disney, and Paramount (since Tom Cruise had a new movie coming out that summer).  Surprisingly, that actually would’ve worked out great.

Dad, also in part due to his upbringings, favored hard assets.  If you had to describe his asset allocation strategy it would closely resemble the Talmud strategy – namely a third in businesses (stocks), a third in land (farm and real estate), and a third in reserve (cash and bonds).  He wasn’t exempt from common behaviorial biases, and he was loathe to sell assets declining, although he would hold onto his winners, forever.  He ran a family farm in Kansas for wheat and milo, and I remember him telling me many years ago “when I grew up it was the farmers driving the Cadillacs – it will happen again someday”.  He turned out to be eerily correct, as farmland values, especially this decade, have exploded.

One of his favorite phrases has been, especially referring to something dumb I had done, “you’re optimizing on all the wrong parameters”.  That phrase has not only applied to a great deal of how I approach markets, but also my personal life as well.  When sitting around lately most of the conversations would center around similar topics – “are you happy”? was always one of his favorite questions.

One of the more surprising revelations was how generous Dad was.  While going through all of this mail we have found evidence of his donating to over 40 different charities, and reminds me of the old Churchill (one of his favorites):  “We make a living by what we get, but we make a life by what we give.”

Dad lived an incredibly full and accomplished life, and we only mourn not being able to spend the coming years with such a great father and friend.  A future without Dad is impossible to fathom, but we take solace that he is in a better place.

A friend passed along the below piece, and I think it especially touching and timely as today would have been Dad’s 80th birthday.  Happy Birthday Dad, we love you (and Go Broncos!!)

In honor of Dad, all of the revenue for the month of February will go to his four favorite charities.

Death is nothing at all. I have only slipped away into the next room. I am I, and you are you. Whatever we were to each other, that we are still. Call me by my old familiar name, speak to me in that easy way you always used. Put no difference into your tone; wear no forced air of solemnity or sorrow. Laugh, as we always laughed at the little jokes we enjoyed together. Play, smile, think of me, pray for me. Let my name be ever the household word that it always was. Let it be spoken without effect, without the ghost of a shadow on it. Life means all that it ever meant. It is the same as it ever was; there is absolute unbroken continuity. What is this death but a negligible accident? Why should I be out of mind because I am out of sight? I am but waiting for you, for an interval, somewhere very near just around the corner… All is well. 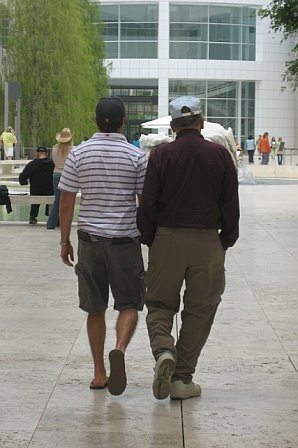