Lots of people have been commenting on the rise of the robo-advisors.  In general I think their development is a positive for individual investors.

(Note to investors: You can lookup any RIA online and see their fee structure and assets under management at the SEC website or at BrightScope.  If any numbers below are incorrect please feel free to reach out.)

Here is a good article from the NY Times, and another from Abnormal Returns.  I have long criticized advisors that charge high fees for managing buy and hold money for clients.  People charge way, way too much for delivering way, way too little.  Here is a quote from a 2012 article:

Investors shouldn’t pay much for buy and hold portfolios.  Honestly they shouldn’t pay anything on top of the <0.30% in fees one would pay for a portfolio of indexed ETFs or mutual funds (we detailed a few of these in our book The Ivy Portfolio).  Now, if you have a killer advisor that is doing tax harvesting and/or adding alpha that is different but not the topic of this post…

Anything more than 0.5% or so on top of fund fees is either paid a) out of ignorance, which is not always the investor’s fault or b) as a tax for being irresponsible.  For the latter I mean a fee to keep you out of your own way of chasing returns and doing something stupid, much in the same way someone pays Weight Watchers or any other diet advice program when you know what you should be doing (eat less, exercise more).  Some broad generalizations here but trying to get to the data below.  That fee is worth a lot if you cannot keep out of the way of your own emotions, and the evidence is massive in favor of that being the case….

…I left out the really high fee advisors where the fee is variable by advisor since it is hard to make generalizations there other than that it is a dying model and you’re a predator if you’re charging 2% commissions and or 2%+ fees for doing nothing.  I pulled most data from the SEC.

My company has never managed buy and hold portfolios for that reason – you shouldn’t be paying much if anything for a service that takes 5 minutes per year.  We outlined a handful of buy and hold portfolios in my book The Ivy Portfolio in 2009 as a do-it-yourself choice.  (We have always managed tactical & active portfolios in separate accounts, private hedge funds, and ETFs.  The fee range on those is 0.59% to 0.79%.)

What I failed to grasp is just how many people still want someone to do a basic buy and hold asset allocation for them.  Below is a chart of some of the top robo-advisors as well as traditional indexing shops.  (If I missed any big ones over $300million let me know. I ignored many of the startups as they have not gained much traction yet.)

As you can see, many still charge very large fees.  What surprised me most was the custodians (Schwab, Fidelity, etc) that charge fees that are way out of line.  According to Vanguard, the industry average managed portfolio is 1.32%.  Kudos for Vanguard moving from 0.7% to 0.3% recently, but Fidelity is bordering on criminal. (Anything below 0.5% in green, above in red.)  Fido, Vanguard, and Schwab are all double dipping – not only are they charging you a feel to do nothing, they charge you on the underlying funds as well!

I thought it would be fun to examine the allocations and the historical performance of two of the top robos.  Below are Betterment’s allocations as well as Wealthfront’s.  I had to make a few assumptions since some asset classes didn’t exist back to the 1970s.  I was too lazy to download midcap value so I lumped that in with small value.  Since emerging bonds haven’t been around that long, those are lumped in with foreign treasuries.  TIPs is a synthetic series pre 1997.

I went through both Betterment and Wealthfront, and below were their allocations for each level of risk for my personality.  As you can see, pretty darn similar allocations with a few minor differences. One excludes real estate, both exclude any commodities.  Both get a pat on the back for (mostly) avoiding home country bias.

(You can perform all of this yourself with our Excel backtester if you are an Idea Farm subscriber too.)  If I’ve missed anything or there are any errors, let me know.  To be expected, they cluster in the Sharpe 0.4 to 0.6 range. 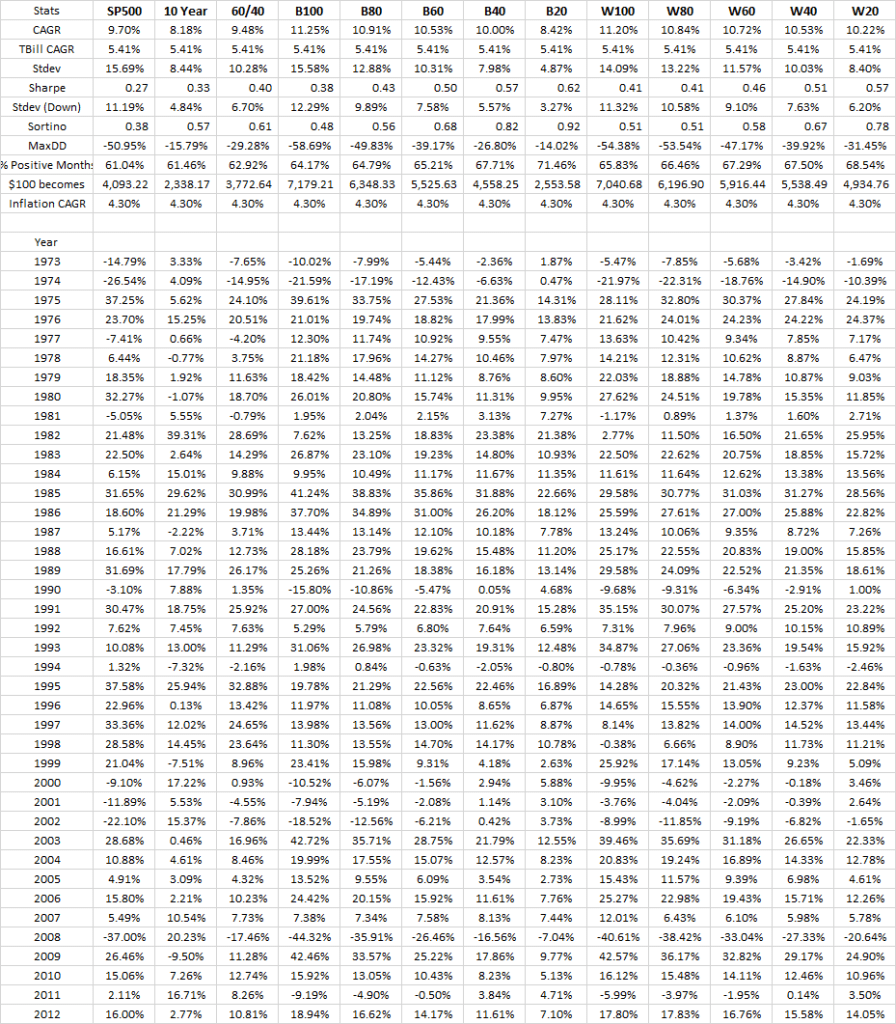 Equity curves for Betterment allocations, I excluded WF as it would be too cluttered.  Sign up for Idea Farm and test all of your own strats! 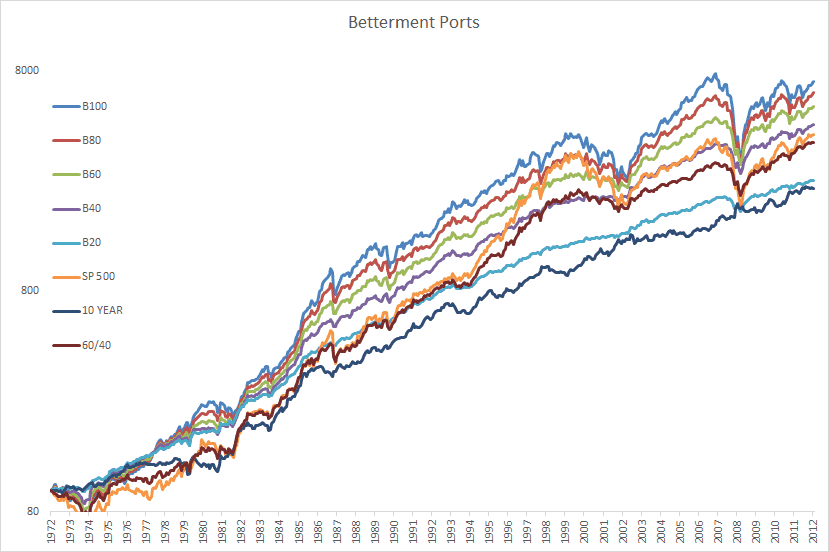