This excerpt is from the book Global Asset Allocation now available on Amazon as an eBook.   If you promise to write a review, go here and I’ll send you a free copy.

“Today we can structure a portfolio that will do well in 2022, even though we can’t possibly know what the world will look like in 2022.” – Bob Prince, co-CIO Bridgewater Associates

Risk parity is a term that focuses on building a portfolio based on allocating weights based on “risk” rather than dollar weights in the portfolio.  While the general theory of risk parity isn’t something particularly new, the term was only coined within the past decade and became in vogue in the past few years. Risk is defined in different ways but volatility is a simple example.  As an illustration, the 60/40 stocks and bonds portfolio doesn’t have 60% of total overall risk weighted to stocks,  rather,  more like 90% since stock volatility dominates the portfolio’s overall total volatility.

Risk parity has its roots in the modern portfolio theory of Harry Markowitz. While introduced in the 1950s, it eventually earned him a Nobel Prize.  The basic theory suggested the concept of an efficient frontier – the allocation that offers the highest return for any given level of risk, and vice versa.  When combined with the work of Tobin, Treynor, Sharpe, and others the theory demonstrates that a portfolio could be leveraged or deleveraged to target desired risk and return parameters. Many commodity trading advisors (CTAs) have also been using risk- or volatility-level position-sizing methods since at least the 1980s.

Ray Dalio’s Bridgewater, one of the largest hedge funds in the world based on assets under management, was likely the first to launch a true risk parity portfolio in 1996 called All Weather.  Many firms have since launched risk parity products.  While the underlying construction methods are different, the broad theory is generally the same.

We are not going to focus too much on risk parity since Bridgewater and others have published extensively on the topic, and you will find several links at the end of this chapter.  Three primer papers to read are “The All Weather Story,” “The Biggest Mistake in Investing,” and “Engineering Targeted Returns and Risks”— all of which can be found on the Bridgewater website.

Bridgewater describes the theory in their white paper “The All Weather Story”:

“All Weather grew out of Bridgewater’s effort to make sense of the world, to hold the portfolio today that will do reasonably well 20 years from now even if no one can predict what form of growth and inflation will prevail. When investing over the long run, all you can have confidence in is that (1) holding assets should provide a return above cash, and (2) asset volatility will be largely driven by how economic conditions unfold relative to current expectations (as well as how these expectations change). That’s it. Anything else (asset class returns, correlations, or even precise volatilities) is an attempt to predict the future. In essence, All Weather can be sketched out on a napkin. It is as simple as holding four different portfolios each with the same risk, each of which does well in a particular environment: when (1) inflation rises, (2) inflation falls, (3) growth rises, and (4) growth falls relative to expectations.”

In another piece, “Engineering Targeted Returns and Risks”, Dalio refers to the simple building blocks he calls market betas (such as U.S. stocks or bonds):

“Betas are limited in number (that is, not many viable asset classes exist), they are typically relatively correlated with each other, and their excess returns are relatively low compared to their excess risks, with Sharpe ratios typically ranging from 0.2 to 0.3. However, betas are reliable – we can expect they will outperform cash over long time horizons.”

Investors need not view any single asset class in its prepackaged form, meaning, leveraging any single asset class, like bonds, can result in higher returns along with volatility similar to stocks. Many asset classes come with embedded leverage already, and adjusting to a risk level by leveraging or deleveraging assets is neither good nor evil – it just is. (A simple example is that many companies carry debt, so one could view stocks as leveraged already.) More from “The All Weather Story”:

“Low-risk/low-return assets can be converted into high-risk/high-return assets. Translation: when viewed in terms of return per unit of risk, all assets are more or less the same. Investing in bonds, when risk-adjusted to stock-like risk, didn’t require an investor to sacrifice return in the service of diversification. This made sense. Investors should basically be compensated in proportion to the risk they take on: the more risk, the higher the reward.”

Many other firms now offer risk parity strategies, and you can track a risk parity index from Salient Partners.  There are a handful of risk parity mutual funds from firms such as AQR, Putnam, and Invesco, although most are very expensive.  A risk parity ETF was filed by Global X but never launched.  The theory is well accepted and adopted by a large cadre of the investment community, but the key question is – “has this strategy simply ridden the wave of a secular trend downward in interest rates?”  Only time will tell.

Below we examine two variations of risk parity.  The first is a risk parity portfolio we proposed back in 2012 while giving a speech in New York City that reflects a broad risk parity style of investing (Figure 25). 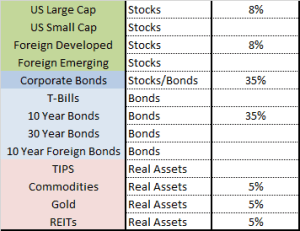 Why try to divine the actual risk parity allocation when we can just go straight to the source and let Mr. Dalio construct it for us?  The second allocation is the “All Seasons” portfolio Dalio himself suggested in the recent Tony Robbins book Master the Money Game (Figure 26). 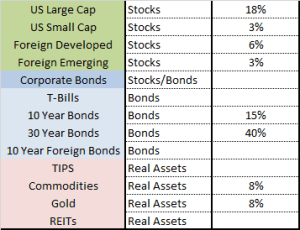 So how did these two portfolios perform?  Almost identically, which isn’t surprising due to the similar nature of the allocation. 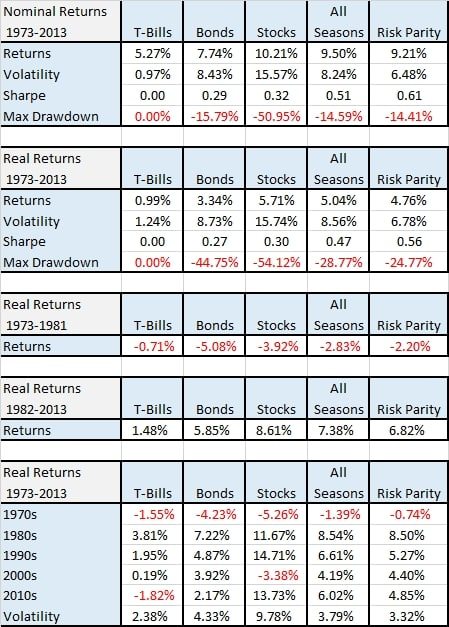 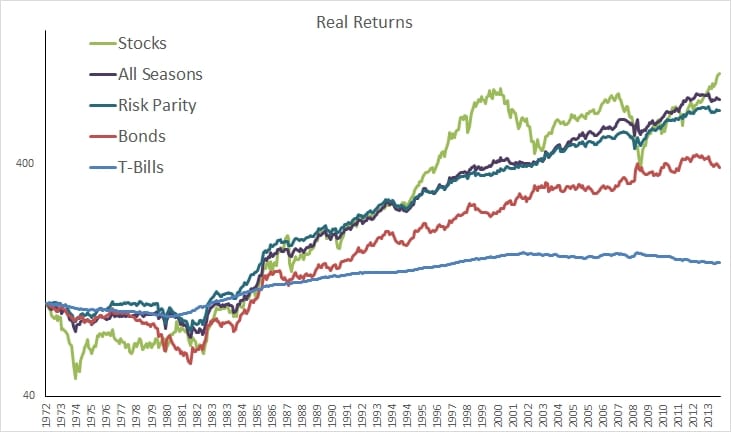 In general, the theory behind risk parity makes a lot of sense with one caveat – the biggest challenge to a risk parity portfolio now is that we are potentially near the end of a 30-year bull market in bonds.  The returns of the actual All Weather fund are better than the allocations above since Bridgewater uses leverage (which is essentially borrowing money to invest more thus magnifying both gains and losses).  You can find a blog post comparing the returns of All Weather to a leveraged Global Asset Allocation portfolio in my article “Cloning the Largest Hedge Fund in the World.”

“At Par with Risk Parity?” – Kunz, Policemen’s Fund of Chicago

“I Want to Break Free, The Hidden Risks of Risk Parity Portfolio’s – GMO

“Risk Parity – In the Spotlight after 50 Years” – NEPC

“Risk Parity for the Masses” – Steiner