I don’t know why I didn’t include this idea in my new book, but consider it a bonus chapter.

Almost everyone in the world knows that he is a great investor.  Hell, he has to be to rank in the top 5 richest people in the world.  So why don’t people simply follow along and ride his coattails?

Because it’s hard.  Let me explain.

You could simply allocate to Buffett’s top 10 stock picks, and rebalance that portfolio each quarter.  He doesn’t trade much so there shouldn’t be a lot of turnover.  How would tracking his portfolio have performed?

According to Morningstar, his picks would have done over 9% a year and would have beaten about 98% of all stock mutual funds in the United States. This also excludes currently dead funds which makes his results even better.

And you wouldn’t pay any fees.  So why don’t people simply follow along and ride his coattails?

Because it’s hard. (It’s also boring and isn’t as “fun” as trading Facebook and Biotechs.)

The reason Buffett is successful is not because he has a magic stock wand, but rather has unbelievable ability to stick to his style.  There are numerous investment styles on Wall Street that work – value, momentum, trend, buy and hold – they all work.  The challenge is sticking to your style and not selling at the worst time.

Below is a simulation from AlphaClone that looks at the 13F tracking performance.  Crushes the market.  But notice something else.  It would have underperformed US stocks seven out of the last nine years!  When would you have fired this manager?  2009? 2010? Certainly by 2013…

So, as you think about your strategy, are you willing to give it 10 years?  15? 20?  Now understand why all of the academic studies show people are so bad at timing….they’re human. 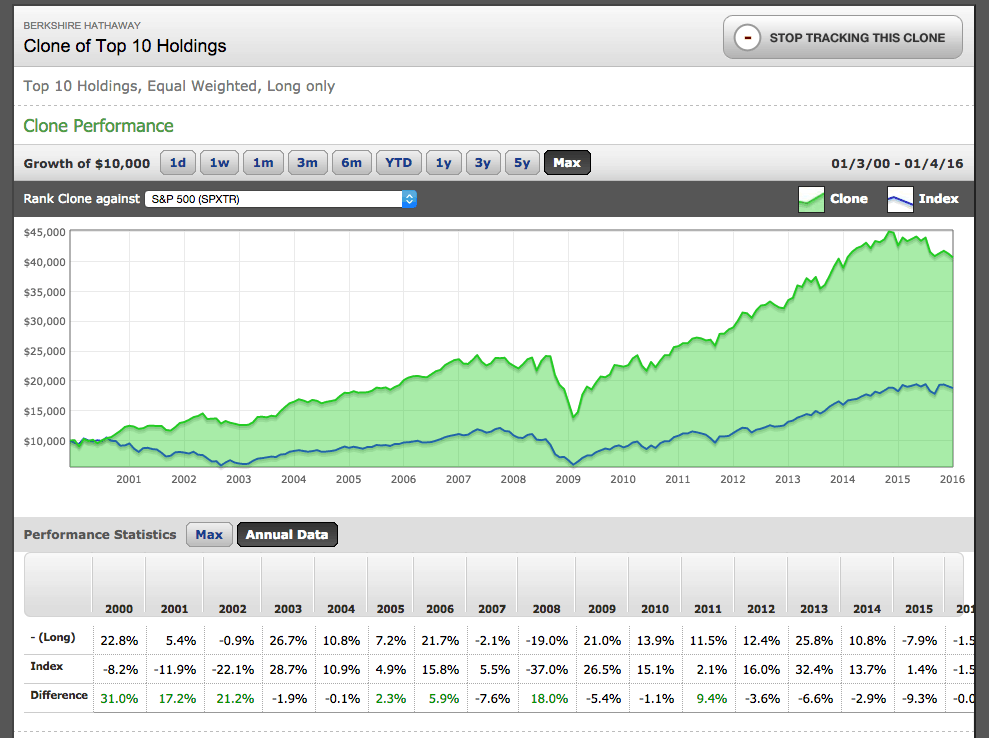