If history is any guide, we’re standing at the edge of 40%–96% returns over the next two years.

This isn’t wishful thinking or wild speculation. I’m not selling anything. Rather, I’m just reporting historical gains from a market set-up that’s repeating itself right now.

So what’s going on?

Well, imagine a rubber band. If you stretch it only slightly then let it go, it’s not going to shoot very far. On the other hand, if you stretch the rubber band to its full elasticity then release it, it’s going to rocket across the room.

History suggests we’re about to see some asset classes rocket across the room.

Back in 2008, I wrote my first book The Ivy Portfolio.  While the focus of the book was asset allocation and basic trend following models, I also touched upon mean reversion strategies. For anyone who’s unaware, mean reversion is the idea that markets tend to have a general equilibrium level. And though their values will rise and fall, sometimes to extreme levels for long periods, eventually they tend to gravitate back toward their unique equilibrium level. And like a rubber band, the more stretched markets get, and the longer they stay stretched, the faster they’ll race back to equilibrium when they finally start moving.

Below is a chart from The Ivy Portfolio that shows some historical returns associated with mean reversion.

Before we get to the opportunity before us right now, I’ll provide a bit more context to help you see how “stretched” we really are.

As it has been 8 years since writing The Ivy Portfolio, I wanted to re-run the numbers and expand the data set. So I started by taking the asset class set above and increasing it to 10 broad assets classes, and extending the tests back to 1972.

But this time, I did something different. When I originally ran these tests for The Ivy Portfolio, I looked at only the 1-year returns after the asset began reverting. But I realized there’s no reason to believe the gains should stop after just one year. So this time, I expanded the hold period to two  years. The results are very interesting: 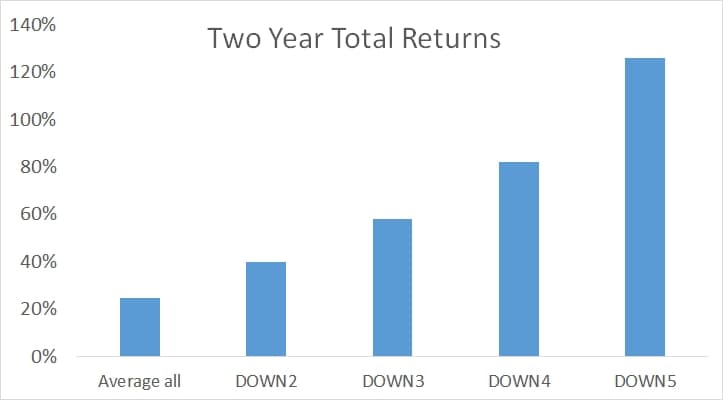 So, with all this in mind, we have some exciting opportunities at this very moment.

On the large asset class level, we have two assets that are down three years in a row. As mentioned above, this is just the fifth and sixth times across 378 years that this opportunity has existed.  What are they?

We’ve written at length on cheap valuations for emerging stocks and foreign stocks in general, and we believe you could see strong returns in the coming years for both. As I wrote above, the last time today’s set-up occurred in emerging stocks, two-year returns were 96%. We’ve never seen this from commodities over the past 40 years—who knows what the returns could be?

As far as opportunities from smaller sectors, countries, and industries, we wrote about this trend in the fall, mentioning coal stocks specifically. But other industries currently down five years in a row include gold miners and the yen.  And all three of these assets are having monster years in 2016. Coal is up 40%, gold miners up 66%, and the yen up 10%.

As far as countries go, Brazil, which we wrote about as being the cheapest country in the world at the beginning of the year, is up a staggering 36%.

Even though these 2016 gains are already big, history suggests the rubber band has been so stretched there’s still major gains ahead.