Below is a fun little chart on investing trends.

We outlined a simple valuation approach to stocks in our old book Global Value.  It simply picked a basket of the cheapest 25% of country stock markets as measured by long-term valuations, and rebalanced yearly.  Despite large historical performance, a global value approach only outperforms the S&P 500 in about 60% of all years. Almost a coin flip!  (Indeed market cap weighted foreign is an actual coin flip with a near 50% out/underperformance vs US stocks.)

And depending on the particular regime they find themselves in, investors come to different conclusions.  Remember everyone clamoring for the BRIC stocks (Brazil, Russia, India, and China) in the mid-2000s?  That pushed valuations to stratospheric levels resulting in CAPE ratios in the 40s and 60s – true bubbles!

Eight years of sorry foreign performance followed, resulting in many to question the usefulness of foreign diversification at all.  But one regime sets the stage for the next, and now we find ourselves in an environment where US has outperformed everything since the 2009 bottom, but ouperformance alters values, and now the US is one of the most expensive stock markets in the world at a CAPE ratio around 27 (though nowhere near the peak valuation of 45 in 1999).

Foreign value has lagged badly, including three consecutive years of underperformance to the S&P in 2013-2015.  This has pushed the CAPE ratio of the cheapest basket to a value of around 9 or 10, less than half the valuation of US stocks.  (Actually it is almost a third the value of the US!)  A global value approach is having a great year in 2016, and we look for that to continue for the foreseeable future.

So, maybe instead of chanting U-S-A, investors should be thinking C-A-P-E? 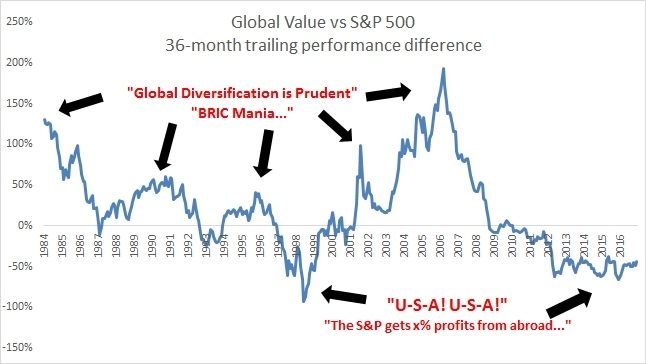