In late 2006 I proposed tracking a portfolio of 10 hedge fund managers I considered to be great stockpickers. It sounded good to me in theory, but I always like to let the data speak for itself. I went and backtested two strategies based on their 13F filings:

The ten managers were:

This process literally took me and a co-worker a month to complete by hand. I found that these two naive strategies of piggybacking on top managers outperformed the market by roughly 6-12% a year (depending on the index you compared them to). Now that we have AlphaClone online, I thought it would be instructive to take a look at the performance, including out of sample returns in 2007 and 2008.

The tables below show results consistent with the backtests – namely outperformance of 9% to 13% per year. I find that amazing given that at least one of these managers has shut down. Any suggestions on who to replace Okumus with? Appaloosa?

However, they are not absolute return portfolios, but rather relative strategies looking to outperform the market. This can be seen in the high volatility (these are annual vol numbers, monthly annualized would be a little lower), high drawdowns, and high correlation to the market. An investor looking to have a more balanced portfolio could hedge out some or all of the market risk. In the below example we use a simple 50% index hedge that excludes any short rebates. Returns are higher due to the terrible S&P returns this decade, risk adjusted returns are higher, and drawdown and correlation decrease. 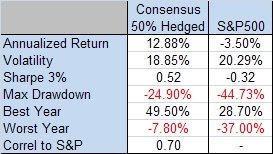