Will 2008 be remembered as the year that dealt a death blow to hedge fund of funds (FOFs) and hedge fund indexes? I love hedge funds, but I am not a big fan of hedge fund indexes or FOFs. (I like the foreign listed hedge funds a bit more than the privates, but that is a different post). They basically give you exposure to all the parts of a hedge fund you don’t want – especially the beta exposure.

To get to the same return as a basic buy and hold, the underlying hedge funds need to deliver A LOT of alpha, use A LOT of leverage, or both.


Here is a nice interview with Swensen where he offers this tidbit:

WSJ: What about fund of funds and consultants? Can they be a solution?

Mr. Swensen: Fund of funds are a cancer on the institutional-investor world. They facilitate the flow of ignorant capital. If an investor can’t make an intelligent decision about picking managers, how can he make an intelligent decision about picking a fund-of-funds manager who will be selecting hedge funds? There’s also more fees on top of existing fees. And the best managers don’t want fund-of-fund money because it is unreliable. You need to be in the top 10% of hedge funds to succeed. In a fund of funds, you will likely be excluded from the best managers. [Mr.] Madoff also relied enormously on these intermediaries. He wouldn’t have had nearly as much resources were it not for fund of funds.

[Swensen recently had a new edition of his book Pioneering Portfolio Management hit the shelves. While I consider the original one of the best books out there on portfolio management, the new edition doesn’t offer much new for investors who read the first edition.]

I wrote an article a couple years ago in the UK magazine The Technical Analyst making the case that the hedge fund indexes are not a good option for the diversified investor.

One of the problems with defining hedge fund performance is that there is no index like there is for other asset classes. Because a hedge fund is a private partnership, there is no requirement to report or disclose performance numbers. There are numerous firms that compile their versions of hedge fund indexes, each with different rules. They have different numbers of underlying funds (60 – 5,000), some collect the data themselves while some do not, some include managed futures and some do not. No one really knows how many funds are in existence.

A database is simply a collection of hedge funds and their returns, and very likely will be replete with survivorship and backfilling biases. In a recent study, PerTrac estimates the number of funds from 11 databases at 22,000 (although after ’08 that has to be a lot less). The estimating is complicated by the fact that a single manager can manage several hedge funds. Very few funds report to more than two or three databases, and only one reported to all of them. Over half of the funds only reported to one database.

Some of the biases included in the databases are:

Selection—Manager can choose if and to what database he reports
performance.

Survivor—Hedge fund managers no longer in existence may be excluded from the database. This can include funds that blew up as well as funds that stopped reporting due to good performance.

Liquidation—Funds that go out of business stop reporting performance in advance of shutting their doors. They are still in the database but their last few months of bad performance are omitted.

Most studies have found that these biases add up to more than 4% in overstated returns. Add that to the fact that most databases only have data for 10 – 15 years, and you can see how these databases have lots of problems (Fung and Hsieh of the London Business School (2006), Malkiel and Saha (2005), Ibbotson and Chen (2005), and Van and Song (2004)).

In contrast to hedge fund databases, hedge fund indices calculate index returns on a going – forward basis, and any additions and deletions are reported in real time. Investable indices, if constructed properly, should be free from these aforementioned biases. When hedge funds are combined into a portfolio, many of the unique and desirable hedge fund features diversify away. Indices no longer resemble hedge funds, but are mainly composed of stock and bond risk.

Hedge Fund Research, Inc. (HFRI) publishes indices that track the hedge fund universe back to 1990, and we will examine the relative performance here because it represents one of the longest histories for a hedge fund index. The HFRI Weighted Composite Index (HFRIFWI) is an equal – weighted index of more than 1,600 hedge funds, excluding fund of funds, and results in a very general picture of performance across the hedge fund industry. The HFRI Fund of Fund Composite Index (HFRIFOF) is a similar index with approximately 750 fund of funds included.

A couple of characteristics of the index methodology must be noted. Because the indices are equal – weighted and there is no required asset – size minimum for fund inclusion, the results will be biased to smaller fund returns. There will be some survivorship bias in the results due to poorly performing managers electing not to report their returns once the results turn negative.

It is difficult to determine the effects of this bias, but a comparison of the HFRX indices (the investable version, available only since 2003) and the HFRI (a financially engineered time series) indices could give a clear view of any tracking error. An analysis we conducted found the effect to be over 4% for each substrategy — a very material difference.

A further examination by Greenwich Alternative Investments found similar results in most of the investable indices. (2007 press release, Johnson) The investable indices will not have the best hedge funds in them because these top performers are sufficiently capitalized and have closed the doors to new investors. One of the problems with the investable indices is that they are constructed with liquidity and investability in mind rather than representativeness of the industry.

Remember, these results must be taken with a grain of salt. With the understanding that the hedge fund indices returns will likely be overstated versus the investable versions, here is the year – by – year results of the HFRI and FOF indices below. (There will also be a slight diversification benefit from the index. It is like a FOF without the fees.)

The results of the HFRIFOF and the HFRIFWI are OK as standalone products. However, adding the HFRIFOF index to a buy and hold allocation does little to improve risk – adjusted returns. The reason is that the risk factors are very similar to a balanced portfolio.

The HFRIFWI does a slightly better job, but once you factor in the underperformance of the investable version it maintains little appeal. Worst of all, the indexes did very little to dampen losses when you needed it most during the market declines of 2008. (Contrast that with the banner years many CTA/trendfollowing funds had.)

The CSFB Index has a very similar Sharpe ratio since 1994 at about 0.6. This also goes to show how difficult shorting is with average annual returns that are negative over the time period.

Overall, I think that these indices are fairly good proxies for the hedge fund universe, but the investable indices are not good investment choices by themselves. 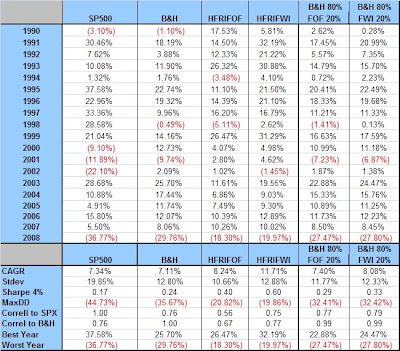