In my last post I examined the performance of the endowments (estimated) versus some publicly traded asset classes, allocations, and tactical models.  Below I am going to expand a bit and see exactly what a difference this past year made.

Every reporter has been all over the story including Barron’s , WSJ , Vanity Fair, and Bloomberg – although NONE have mentioned my book.  That is a bit frustrating, but to be expected.  It is a better story to talk about how much money these endowments have lost rather than review or mention a slightly academic book (with lots of data and tables) that would have shielded investors from the bear markets.

Buy and Hold is an equally-weighted, monthly rebalanced allocation to the above 5 asset classes 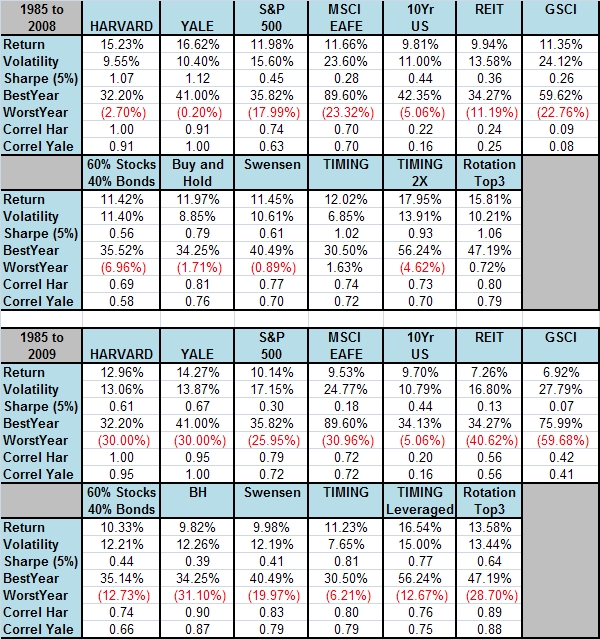 -Harvard and Yale’s returns are highly correlated at .91, suggesting they follow similar strategies and allocations.

-Harvard and Yale beat any one asset class by roughly 3-5%.

-Harvard and Yale beat most indexed allocation models by 4-5% with similar volatility.

-Harvard and Yale are highly correlated to equity markets, as well as a diversified buy and hold including real assets.

-Harvard and Yale’s returns are even more highly correlated at .95, suggesting they follow similar strategies and allocations.

-The bear markets of 2008/2009 knocked a full 2% off the compounded returns of the endowments.

-Harvard and Yale still beat any one asset class by roughly 3-5%.

-Harvard and Yale still beat most indexed allocation models by 3-4% with similar volatility.

– The endowments’ Sharpe Ratio took a heavy beating, knocking it down to the .60 range from over 1.0.  (A nice rule of thumb is that most asset classes have Sharpe Ratios of around .2, a diversified allocation is around .4, and momentum style models can get you up to .7 and .8.  To get higher than that you need AlphaClone ,ha.)

– The timing model now has a higher Sharpe Ratio than the endowments, largely due to avoiding the bear markets of 2008 and 2009.  The leveraged timing model (at 2X at broker call rate) would have outperformed the endowments on an absolute and risk adjusted basis.

-The Buy and Hold allocation now has a whopping .9 correlation to the Harvard and Yale endowments.

What is some of the advice you give individual investors?

A simple portfolio we advised in the book was:

We further split these allocations into 10 and 20 asset classes in the book.  Next,

Is the endowment model broken?

Just looking at the data, the endowment model has outperformed anything over the time period studied.  The biggest criticism for the endowments is that they did not manage their risk, liquidity, and “tail-risk” enough. I think that is a fair criticism.  But, in general, diversification works (most of the time).

There is a great paper coming out of a wealth management shop here in LA that deconstructs the Yale returns even further (ie adding value and small cap tilts, a little leverage, etc).  They find that most of the outperformance is due to, surprise, the private equity allocation.  As we mentioned in the book, is the PE game over now that there is so much competition?  TBD.

Is buy and hold dead?

Anyone that makes this statement usually does not have a healthy respect for history if last year changed their opinion of buy and hold.  EVERY asset class is great sometimes, and horrendous other times (gold, bonds, S&P 500, foreign currencies, and Argentinean stocks included).  Buy and hold has never worked in periods of serious market stress.  Just ask those Tulip/South Seas buy and holders.

How is the model allocated now?