With the US Dollar being undervalued against most pairs on a PPP valuation basis I thought I would chime in quickly as a follow up to our last currency post.  This post is a snippet from a much longer post/white paper/book but below I take a look at a simple topic, the currency carry trade, and a different way to think about it.

The most popular currency valuation model is the purchasing power parity model (PPP model, wiki entry here).  It often takes makes many years for currencies to revert to their “fair value”, and there is a gazillion additions and refinements one can make to improve a model such as this.   A chart of the USD/AUD is below and you can see how slow the PPP line moves: 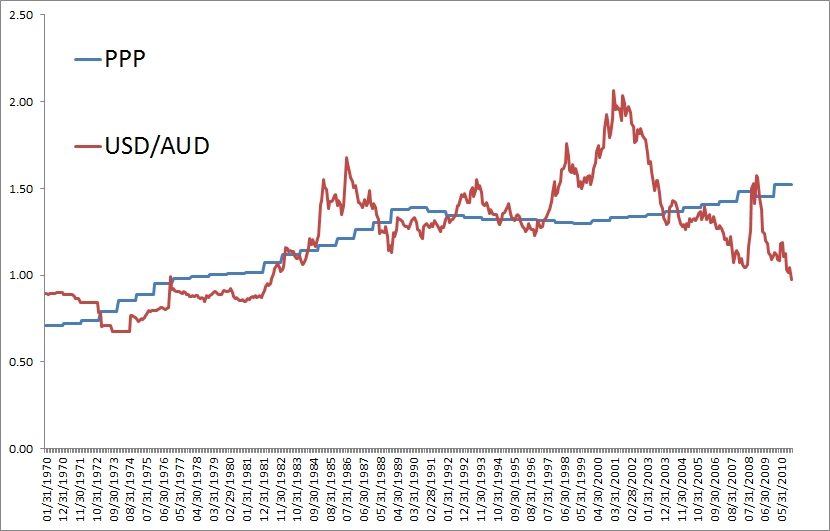 However, that doesn’t mean one cannot profit from simple models, and the carry trade has been an example of another simple model that has worked over time, and DBV is an ETF that is listed on the strategy.  (Disclosure:  We do not own any DBV but own other currency ETFs and may own any/all in the future.)

But as far as the simple currency strategies go (momentum, trend, yield curve, etc) carry is one of the best returning but worst diversifying to a normal portfolio as it has some nasty left skew and kurtosis.  However, like many asset classes or strategies, it depends on when you allocate – and in this case it depends on the valuation of the long basket vs. the short basket.  The methodology we are using is the G-10 based on OECD numbers.

If you look at the one year returns since 1975, the returns to a carry trade are largely dependent on the basket valuation.  ie you are essentially betting on a valuation spread and historically it has been better to be relatively long undervalued currencies and short overvalued ones.  But that has been the case with every asset in history – it is better to pay a lower value than higher (duh).  That seems like an obvious statement but how you determine “value” in a world of emotional humans is the $mm question.  It looks like the Yen and the Swiss Franc are particularly vulnerable right now.

Below are the returns to the carry trade for one year holding periods based on valuation spread (I also included a leveraged version as many funds run it 2x)  for various buckets of under/overvaluation (long 3/short 3 from G10): 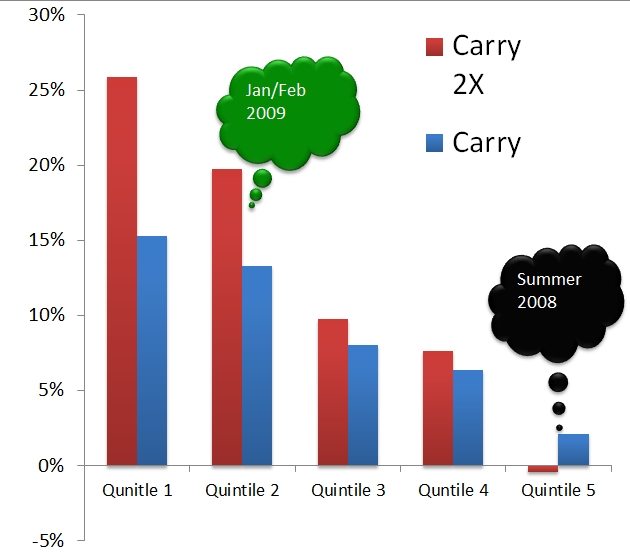 Hat tip to Deutsche Bank for the inspiration for the concept.