Remember back in March when everyone was talking about the US bond bubble?  Commentators like Taleb were making statements such as “every single human should short treasuries” and even the bond king Bill Gross was shorting them.    However, we did a post on how this was the largest drawdown for the US long bond EVER and historically that was a great time to buy into an asset class (When Things go on Sale, People Run out of the Store).

What has happened since the early 2011 lows?  The long bond zeros have had a stunning 50% rally.  Now who says bonds are boring?  (Here is an older post on bond math: Returns to bonds vs. changes in interest rates. )

Now many people are thinking about what to do with their bond holdings after this rally…it is instructive to take a look a Japan and how their bonds have performed as we think that is one of the best comparisions.  If you align the Japan series starting in 1990 and the US in 2000 you have a similar trend in interest rates.  The interesting thing to note is that after initally crossing below 2% JGBs have not risen above that ceiling for the past 10 years.  Nor has their yield curve ever gone negative in the past 20 years.  Japanese bonds have returned over 30% since initially crossing below 2% and Japanese stocks have had negative returns over the period…

Food for thought and a reminder that every asset class is great sometimes (gold, and bonds recently) and horrible other times (financials, real estate and oil recently).

For more on the subject check out our recent research piece on pension funds and the endowment model in Japan:  “What if 8% is Really 0%?” 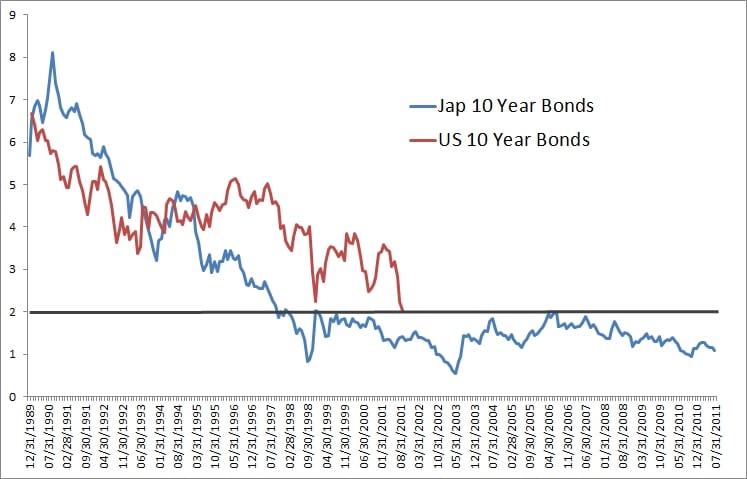