It is often very difficult to determine how geopolitical events will play out in markets.  However, there are some cases where a structural change will have a very logical influence on a market and a substantial impact on investment strategies and outcomes.

Today there is news that in his recent budget proposal Obama outlines taxing dividends for top bracket earners as ordinary income up to 40% from the current 15%.  How will this impact the investment landscape?

One structural change in the stock market is that companies pay out less in cash dividends than they have in the past.  As seen in Figure 1, while companies have historically paid out, on average, 60% of their earnings as dividends, this figure has been declining for the past seventy years. 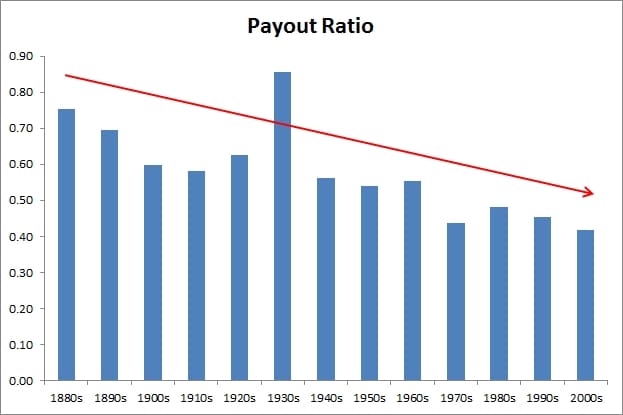 Likewise, as shown in Figure 2, the number of companies paying dividends has been decreasing, as well.  At one time, nearly all companies in the S&P 500 paid a dividend, but that figure has declined to roughly 70% today.  (The shaded areas represent regimes where dividends were not tax disadvantaged to income.) 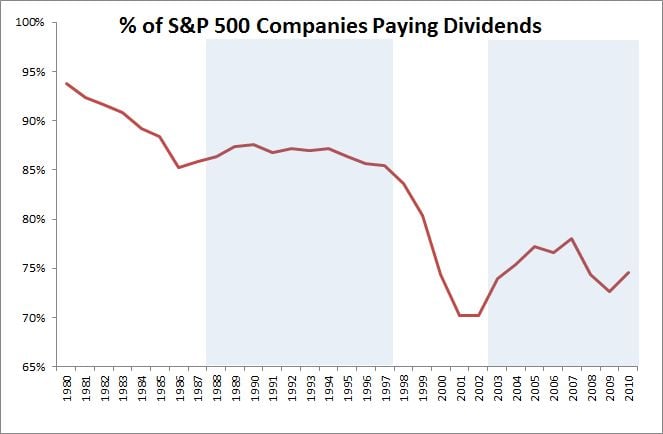 The combination of these two forces, less companies paying dividends and companies paying out less of their earnings as dividends, has resulted in the dividend yield on stocks declining to all-time lows levels in the past decade.

When examining any fundamental shift in markets, we must analyze why the change occurred.  Why are fewer companies paying out cash dividends, and why has the amount of earnings paid out as cash dividends decreased?

One of the reasons that companies pay out less in dividends is due to the SEC instituting rule 10b-18 in 1982 – which provided safe harbor for firms conducting repurchases from stock manipulation charges.  A noteworthy paper on trends in corporate payout policy is Dividends, Share Repurchases, and the Substitution Hypothesis (2002) by Grullon and Michaely.  Once the government made it easier for companies to buy back their own stock, Figure 3, below, details how stock buybacks went from nearly nothing to either equaling or surpassing capital that was paid out as dividends in the late 1990s.

FIGURE 3 – Amount of Dividends and Buybacks, All Stocks. 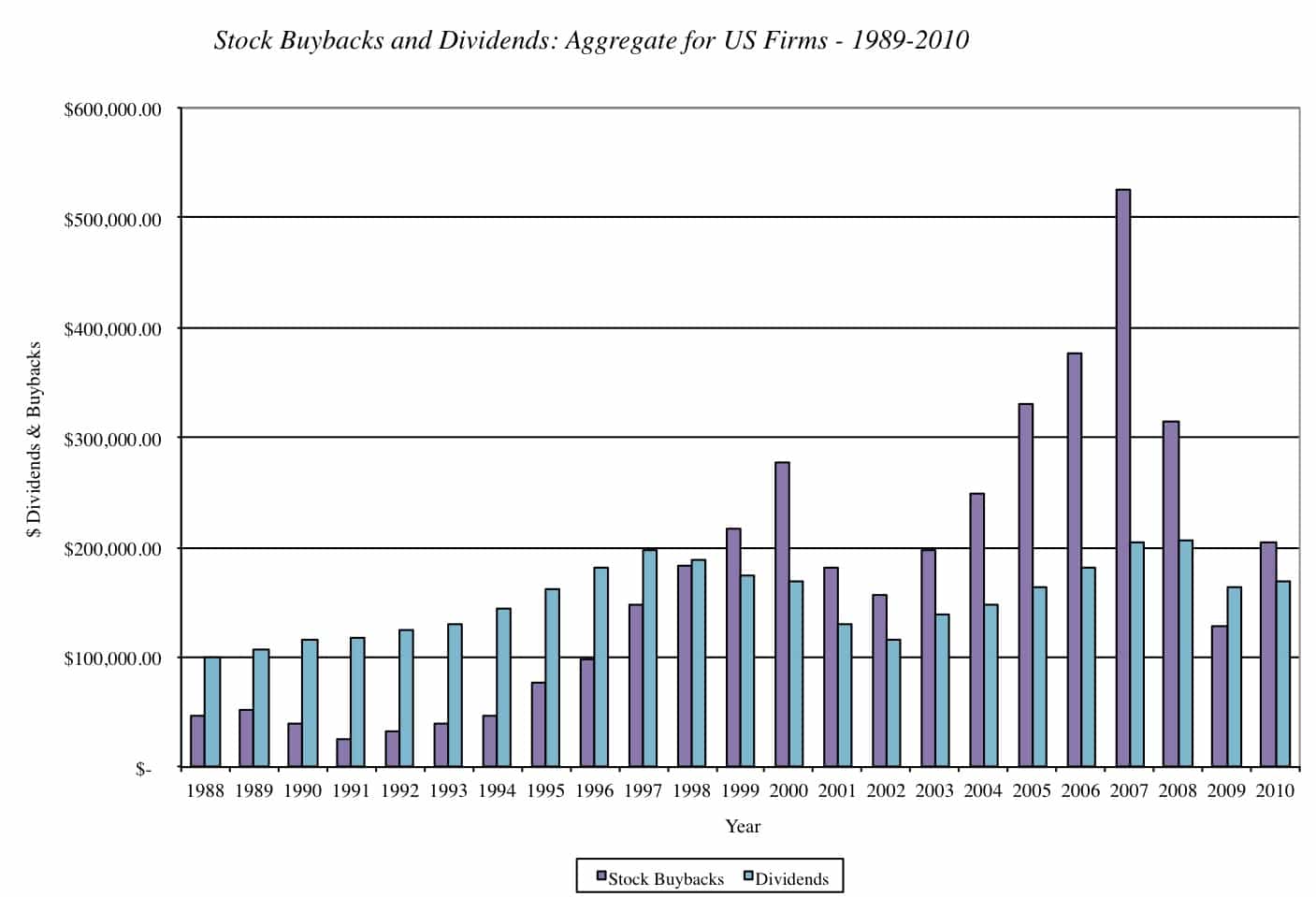 Why might companies choose to buyback stock rather than payout cash dividends?  While tax rates fluctuate with the political seasons, it has often been the case that dividends taxed as income have had inferior tax treatment to long-term capital gains that are taxed at lower rates.  For over half of the past forty years, dividends have been taxed at higher rates than long-term capital gains, with the exception of 1988-1997, and 2003-present.  While this disadvantage was slightly improved by the recent Bush tax cuts, and while there are some foreign countries that do not have inferior tax treatment for dividends (see table at the end of the post for dividend and tax rates by year), the number of companies paying dividends has, nonetheless, declined from nearly 100% to around 66% for the largest stocks in the U.S.  The percentage of companies remained relatively stable during the shaded areas in Figure 2, representing  the 1988-1997 and the 2003-present periods where dividends were not tax disadvantaged.

Investors shouldn’t care whether their returns come from dividends or capital gains (the so-called Modigliani-Miller theorem).  This approach assumes a tax-neutral investor when, in reality, most investors are highly sensitive to tax treatment.   A recent study finds plenty of empirical support for this argument  (here is also a summary from Cowen at Marginal Revolution, Hat Tip:AF):

Abstract:
We compile a comprehensive international dividend and capital gains tax data set to study tax explanations of corporate payouts for a panel of 6,416 firms from 25 countries for 1990-2008. We find robust evidence that the tax penalty on dividends versus capital gains is statistically significant and negatively related to firms’ propensity to pay dividends, initiate such payments, and the amount of dividends paid. Our analysis further reveals that an increase in the dividend tax penalty raises firms’ likelihood to repurchase shares, initiate such repurchases, and the amount of shares repurchased. This is strong confirming evidence that when listed industrial firms globally design their payout policies, they take into careful consideration the relative tax implications of their payout choices.

How does this impact your investment decisions?  Are dividend stocks going to become more or less relevant?  Stay tuned, lots more to come in a future post soon… 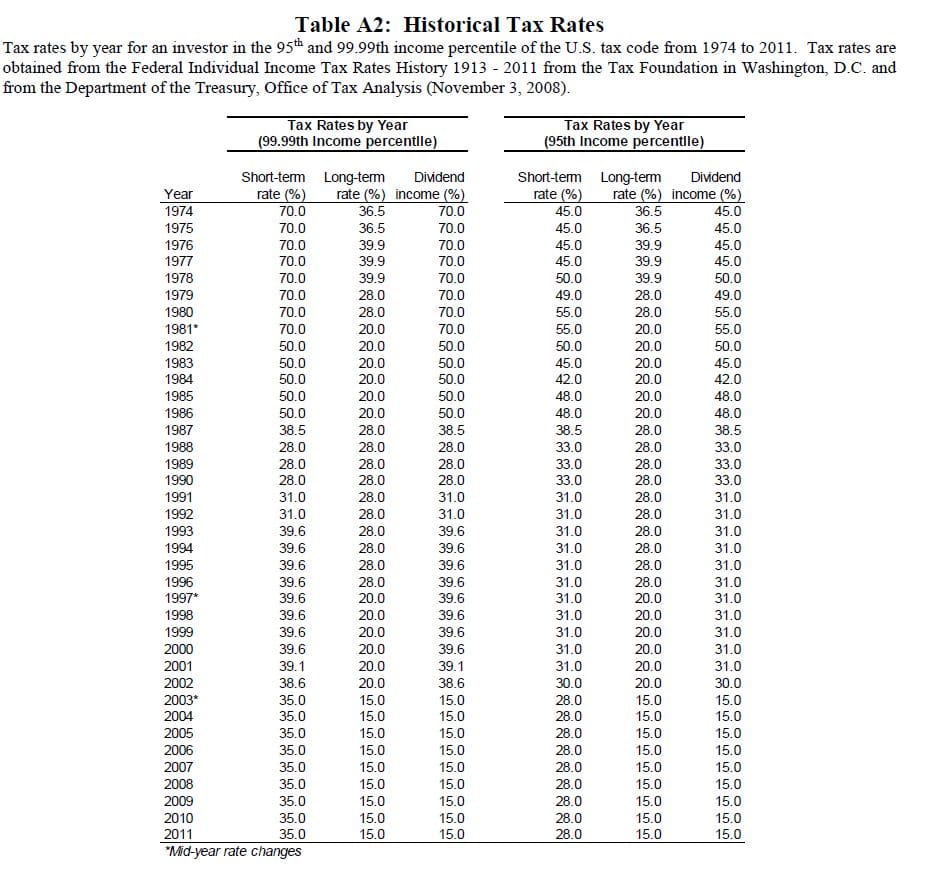 Source: “How Tax Efficient are Equity Styles?” by Israel and Moskowitz.