I’ve always believed in learning from other investment greats as mentors, and that is the tagline from my other site The Idea Farm:

“I believe in the discipline of mastering the best that other people have ever figured out.  I don’t believe in just sitting there and trying to dream it up all yourself.  Nobody’s that smart.”  – Charlie Munger

and also one from Vincent:

“I believe I do much better for the time being by first copying some good things than by working without that foundation.” – Van Gogh (HT Janiczek)

I’ve written dozens of posts on this blog on the topic of 13F investing.  For those new to the blog you can search the archives for “13F” and find all of the posts.

Many people have not gotten their hands dirty with 13Fs, databases, or stocks in general so they resort to stories or analogies to explain why 13F forensics should not work.  There is so much misinformation in the 13F space, and most comments are simply not based in a firm understanding of what works and what doesn’t, but rather guesses.   But that is what most financial commentary is (ie all of the commentary surrounding buy and hold and market timing, what drives stocks, often has the feel of debating religion or politics).  So often stories are convincing because they sound true – but that is the beauty of being a quant, like Fama says, “it it’s in the data”…

-Can anyone beat the market?

-Can you pick a manager ahead of time that will beat the market in the future?

Most of the academic literature suggests no to both answers (on aggregate).  But does that mean someone cannot answer yes to both questions?  Of course not.

We published The Ivy Portfolio back in 2009, and ever since my book came out in 2009 I’ve tracked a group of hedge fund managers we mentioned in the book that would be good funds to track through 13F stock picks.  Last year’s post is here:  7% alpha. (older post here The Value of Ira Sohn.)  There are reams of academic papers on the subject including this paper from my friend Wes at Empirical Finance that demonstrates ability to follow managers and disclosures, but one simple example is that following Buffett since the 1970s would have resulted in >10% outperformance per year – and he has beaten by 8% per annum since ’00.  So much for all those detractors that say he isn’t a good stockpicker!

We can all backtest until the cows come home but all that matters is real time performance of course.

From the list in the book (a handful of funds were never added to the database, but this is all real time so it does not matter):

Impressive real time results, and not to mention 13F tracking would have kept you out of Galleon.

So, at the end of the day would you rather listen to Seth Klarman or your local broker when picking stocks?

Top funds that did over 30% a year include:

Here is a chart of all of the funds, and the black dotted line is the S&P 500. 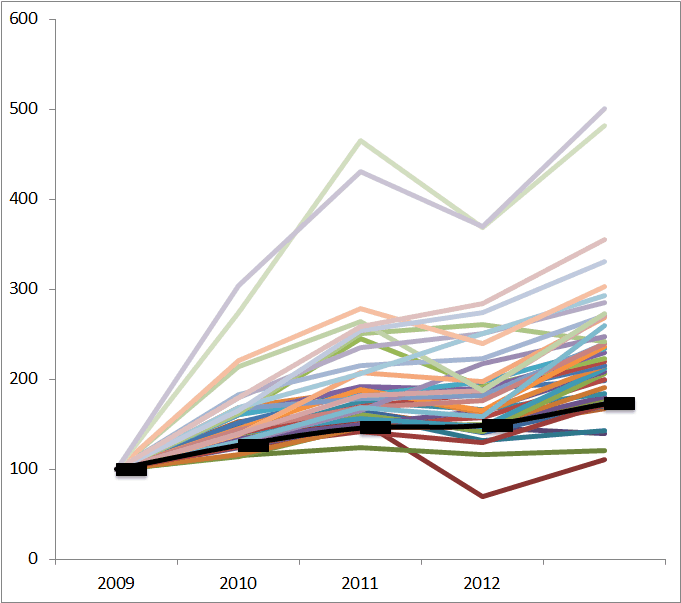