People often get attached to their investments.  You will hear people described as a goldbug, or a stock guy, or perhaps a dividend income loving retiree.  I’ve never really seen the wisdom in falling in love with one asset class or another.  It seems to me from history that every asset class is great sometimes, and horrible other times.  On top of this layer in all the behavioral biases that people have once they like and/or own an asset class and you then start to really get emotions involved.

Lots of debate and inquiry raging about the shiny metals lately.  We have written about a lot of the fundamentals behind investing in metals on the blog in the archives, as well as some simple technical posts.  Here is one from 2009.  Here is a recent Hulbert piece on gold that summarizes this Erb and Harvey paper out recently: “The Golden Dilemma“.  From the Hulbert summary:

“But to come up with an estimate of gold’s fair value, they calculate a ratio of gold to inflation going back as far as they were able to obtain data. They report that this ratio, when expressed in terms of the U.S. Consumer Price Index, has averaged about 3.2-to-1. Even at $1,400 an ounce, this ratio stands at 6.03-to-1, or nearly double this average.”

I thought I would update the chart in our earlier post, that simply looks at a long term trendfollowing approach to gold, and investing the cash in Tbills or 10 Year Bonds when below the long term trend as defined by 10 month SMA.  You would have exited the long gold position at the end of 2012.  This data doesn’t include March… 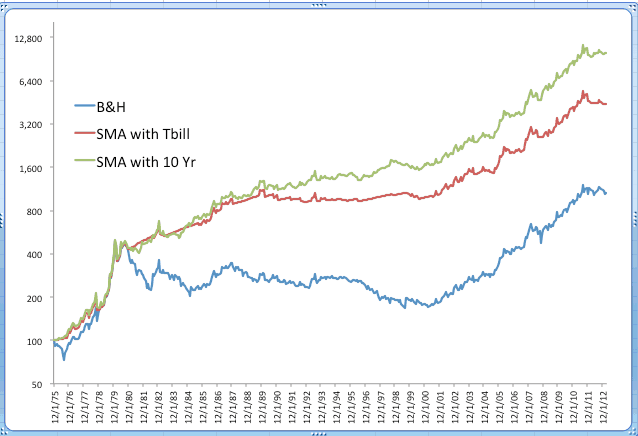 Gold objects have existed for thousands of years but for many investors gold has only recently become a tradable investment opportunity. Gold has been described as an inflation hedge, a “golden constant”, with a long run real return of zero. Yet over 1, 5, 10, 15 and 20 year investment horizons the variation in the nominal and real returns of gold has not been driven by realized inflation. The real price of gold is currently high compared to history. In the past, when the real price of gold was above average, subsequent real gold returns have been below average. Given this situation is it time to explore “this time is different” rationalizations? We show that new mined supply is surprisingly unresponsive to prices. In addition, authoritative estimates suggest that about three quarters of the achievable world supply of gold has already been mined. On the demand side, we focus on the official gold holdings of many countries. If prominent emerging markets increase their gold holdings to average per capita or per GDP holdings of developed countries, the real price of gold may rise even further from today’s elevated levels. As a result investors in gold face a daunting dilemma: 1) embrace a view that “those who cannot remember the past are condemned to repeat it”, there is a “golden constant” and the purchasing power of gold is likely to fall or 2) embrace a view that “this time is different” and the “golden constant” is dead.