“Because I believe that all criteria for investing (that is, good betting strategies) should have a logic that isn’t time specific, I believe that the alpha generators that make up the ultimate alpha generator should be timeless and universal. By that I mean that they should have worked over very longtime horizons and in all countries’ markets.” Ray Dalio, Founder Bridgewater

Any trading system that is based on uncovering alpha, at least to me, must have a fundamental reason why the strategy works.  If you cannot explain why the inefficiency exists, or understand the fundamentals behind a technical strategy then you are likely just data mining.  I can get on board with the Presidential Cycle (source: NDR) as there are possible monetary reasons that strategy would work (artificial election year stimulus).  We are currently in the most favorable year (3) of the cycle being the pre-election year. Also Crossing Wall St.

One popular system many people discuss is the “Sell in May and Go Away” (also known as the Halloween Indicator) strategy.  The system simply invests in the stock market from November – April, then moves to cash from May – October.  This strategy popularized by Yale Hirsh (who writes the informative and entertaining Stock Trader’s Almanac 2011), has its origins in the U.K. market as far back as 1935 (see must read paper “Are Monthly Seasonals Real?“).

The paper finds very strong evidence of abnormal performance in the UK since the 1600s, and Bouman and Jacobson (2002) find that the strategy works in 36 of the 37 countries they tested.

This strategy has performed mightily since 1950 in the US as the chart below indicates. This is what is great about the investment blogosphere – the velocity at which an idea whips around and lots of people can comment on it and share their input…Lots and lots more chatter here on: Abnormal Returns, Hulbert,and CXO.

If you take the strategy back to 1900 in the US, the results do not confirm for the first half of the century.  You have to ask yourself “What is the fundamental reason this strategy works?”  Some offer Seasonal Affective Disorder, holiday good tidings, pension flows, summer vacation, and tax season in April…

In any case, the new period starts Monday! 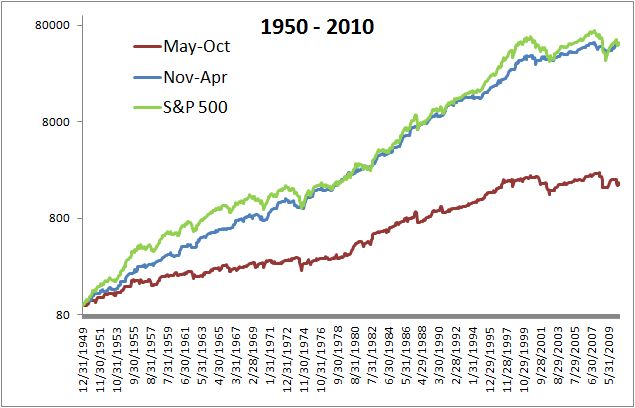 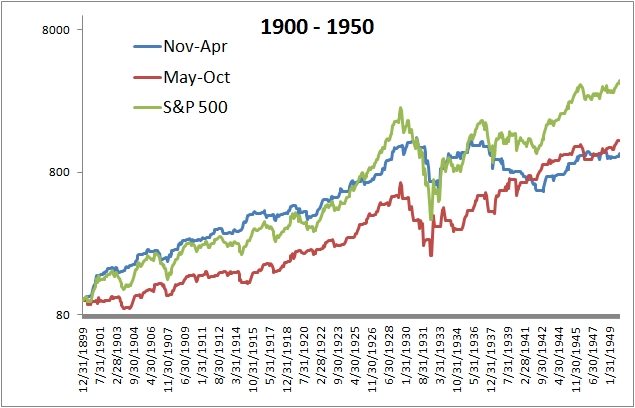 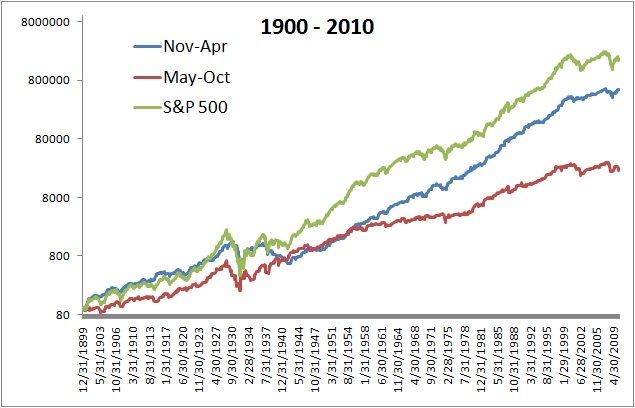