I was considering doing this post as an entire book, but I have too many other articles in front of it.  The basic thesis is that there are a lot of simple, small improvements one can make to a market cap portfolio.  Below are two papers from the good folks at Cass Consulting:

Basically the take away is that most weighting schemes are better than simple market cap weightings.  As a fun example, many of you have read our Global CAPE paper that constructs 10 year PE ratios for global markets.

Had you sat around the dining table cheers-ing your loved ones at the end of 1999, and as you sat reviewing your investments, and say you were planning a 10 year cruise (no internet, no email, no phones), you could only invest in 3 countries over this time period.

Had you invested in the 3 most expensive, average CAPE 57, of you would have returned -40% real.

Had you invested in the 3 cheapest, average CAPE 14, of you would have returned 24% real.

Remember this was bubble territory so not many countries were cheap, so total returns were not that exciting for any equities.

So, think about it right now.  If you could only invest in three countries, would you prefer the basket trading at an average CAPE of 5 or 26?  I think you should be name agnostic.  While you would have been buying Thailand, New Zealand, and Chile in the late 1990s, now you would be buying Greece, Ireland, and Russia (and Argentina if you consider that investable).

This goes to show a simple value sort rather than market cap, and note right now, the largest country by market cap in the global index is the fourth most expensive in the world…

Below is a simple table that looks at many different published anomalies and their subsequent investable ETF counterparts.  None of the names are recommendations, and some are probably not even the best fund in their category.  There’s also a lot of other factors one could include like profitability but I was just trying to demonstrate a simple point….(you could also do cross asset class and allocation tables too.) 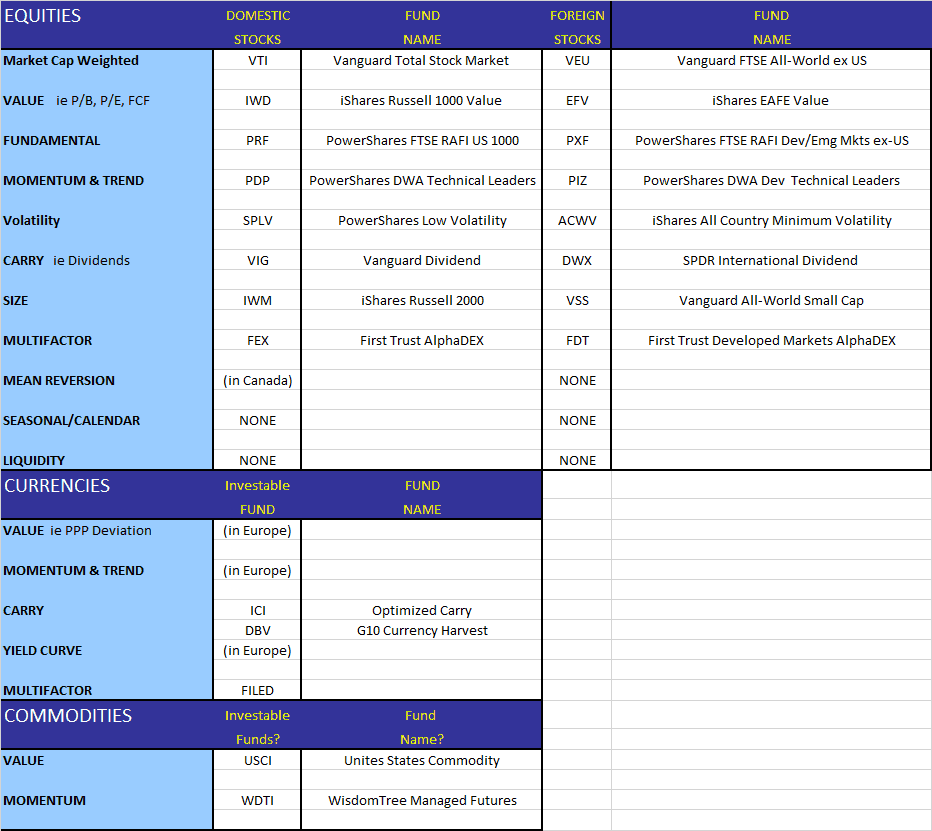