Let’s say you are a macro value investor, and let’s say you particularly liked using the CAPE ratio.  Well, one argument against CAPE is that is has held an expensive rating on stocks for a looong time.  How long?

Since 1992!  Stocks ended 1992 at a value of 19.8 (prior year was 15.7).  If you were a prudent investor you may have moved your investments into bonds as stocks got expensive, thus missing the massive bull market and looking like a fool for EIGHT years.  You would have looked like a total moron to all of your friends and former co-workers since you would have been fired by 1995.  Many people use this argument as a reason why long term valuation doesn’t work.

Had you invested in stocks over this period, you would have returned 9.32% per annum, with two whopper bear markets the biggest being a loss of 50%.  Had you moved your money into 10 year bonds you would have done a respectable 6.33%, with a much lower -10% drawdown and a slightly higher Sharpe (cash was an awful 2.82%).

Had you switched back into stocks when they were reasonable (CAPE <20), you would have improved returns to 8.10% with only a 25% drawdown.

So, not at all bad considering you sat out the massive bull, but also sat out the big bears. 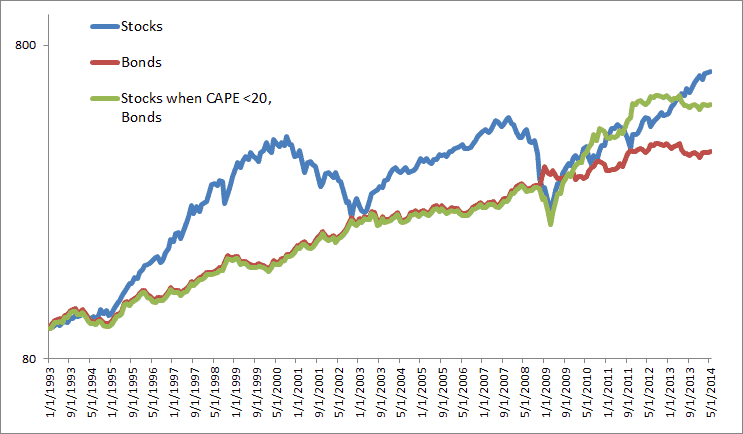 But no one says you have to invest just in the US.  That is not your opportunity set.  You have the option to invest in anything in the world.  Houses, baseball cards, wineries in Argentina, etc.

What if when the US was expensive in 1993, you choose to look abroad and invest in the cheapest countries in the world?  That would have had you investing in countries like Norway, the Netherlands, Spain, and Sweden.  (You may not remember but Norway was the Greece of the early 1990s, hard to imagine but just coming out of a massive banking crisis…)

So, instead, had you invested in the cheapest 25% of countries in the world as detailed in our recent book Global Value (as long as they were below CAPE of 20), and rebalanced yearly, you would have returned 17% per year.  Still a -40% drawdown but that comes with the territory in stocks.  That would currently have you in countries like Brazil, Russia, Greece, and emerging Europe.  That may be a hard thing to do, but what sounds better, investing in a basket of countries trading at a CAPE of 9, or a country in a five year bull market trading at a CAPE of 26?

So, next time someone talks about macro value investing, and how it would have had you out of the US since 1993, tell them that’s a good thing! 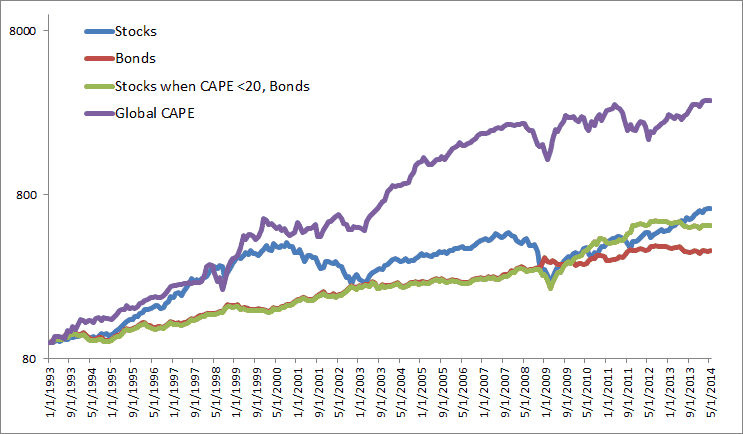