I attended a fun evening dinner with my friends from FirstTrust this week.  They had a guest speaker who was a political consultant – usually this isn’t my favorite topic – but I joined to have a few glasses of wine then sneak out.  Fast forward a few hours later and I was fascinated with the speaker, who was able to weave policy, investing, and economics into a sort of mash-up of House of Cards and George Soros.  At one point I was asking about the historical tax rates and Republican versus Democrat hair pulling over the subject.  It is interesting to me that taxes as a % of GDP have ranged between 14 and 20% of GDP since 1950.  But politicians are not making bold proposals for 50% or 10% of GDP, but rather very very minor alterations.  The speaker referenced how Obamacare and Keystone pipelines were likewise very minor components of total spending and supply – but essentially it gives politicians something to fight about.  How else will you distinguish yourself from your opponent when you are so similar?

This reminds me of the state of the roboadvisors.  Even though I believe asset allocation ETFs are superior to these separate accounts, the development of the roboadvisors has been a big positive for investors (mainly due to fee compression for the managed account space).   While most of their innovations have been around for awhile, the ability to wrap them in a beautiful offering that people will use is a great benefit to investors.

I wrote a big about this last month in the piece “What a Great Time to be an Investor!“.  I was a little surprised that some of the companies were getting into a catfight over some of the specifics of their offerings, when in my mind they were on the same side of the good fight.  What I failed to realize, was that in a world of very, very similar business models, they need to create the appearance of big differences – otherwise how will they be able to distinguish themselves in a world of cutthroat competition?

A nice article was published today from Liz Moyer at the WSJ looking at the very different allocation proposed by the various advisors when she went through the questionnaire.  While the allocations look very different (one has 9% in cash, another zero,  one has 5% in gold, others zero…you get the drift) how do they perform?

Does it even matter?

Below are the returns and equity curves for the allocations historically back to 1972. (Similar older post here.)  As you can see, it is a rounding error what allocation you choose!  I mean, a total CAGR difference of 0.22%!  I do think that someone eventually will offer tactical roboadvisors instead of everyone just doing MPT, which could seriously stand out from the competition.  Also, what’s up with none of the robos tracking their performance through GIPS?  In a world of expensive US stocks, when is someone going to include managed futures or liquid alts?

If you want to read some more on the subject, I’m happy to send you a free copy of my new book Global Asset Allocation.  Just sign up here and I’ll send you one on Amazon – you just have to promise to write a review when finished! 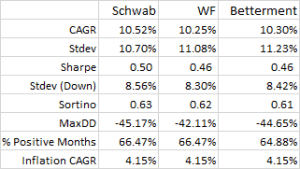 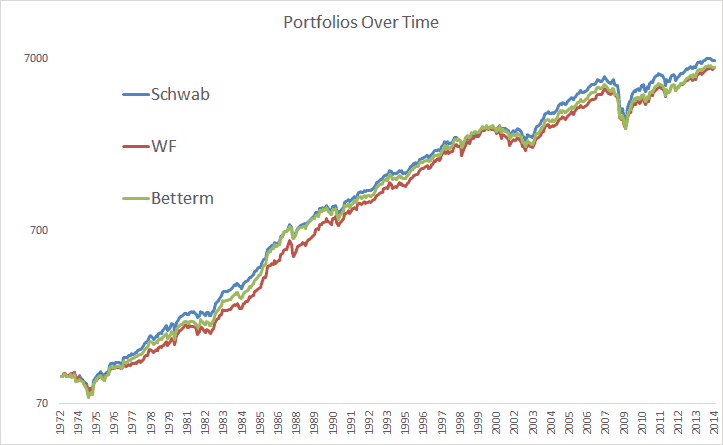