I’ve written a lot on asset allocation and the automated investment services.  In general I am positive on the low cost, tax efficient, algorithmic investing platforms.  The big four, in order of AUM, are Vanguard, Schwab, Betterment, and Wealthfront.  Vanguard is somewhat of a hybrid with over $20B, charging 0.3% and including an advisor, whereas Schwab ($4B) Betterment and Wealthfront ( about $3B each) are pure robos.

Wealthfront moved into 4th place after being an early frontrunner, prompting them to go on the attack vs. both Schwab and Betterment which is a shame (or possibly the attacks turned people off and actually caused the slide in ranking).Schwab would probably be even higher if they didn’t keep doing silly things like requiring minimum cash balances and blocking active ETFs.  But I do expect the custodians who manage their own ETFs, like Schwab and Vanguard, to win out over time as they have a built in structural cost advantage.

The three platforms combined have < $10B in AUM when the real enemy should be the asset allocation mutual funds that charge over 1% in fees and manage over $330 billion.  As I wrote earlier in the year, it is a wonderful time to be an investor.

(In fact there is only one ETF with a permanent zero percent management fee, but perhaps more to come in 2016!)

Each platform its own unique features, but if you’ve read my recent Global Asset Allocation book, you know that I think they basically all do the same thing.  (If you haven’t read it go here and I’ll send you a free one.)

That’s not a bad thing of course, they all give you a fairly global allocation of stocks, bonds, and a smidgen of real assets for about a 0.2% management fee and limited or no financial planning.  I depart on the allocations of course (moving away from market cap weighting and adding trend/liquid alt strategies would be two areas), but the performance should be near identical.  A much more important impact on performance is fees, which we discussed here, here, and here.

Oddly, none of the platforms publish GIPS performance (an investment management standard), which is weird.  Perhaps they don’t want to “focus on performance”, or perhaps because performance has been poor, but they don’t publish and they should.

So, below I’ve estimated some performance figures from this earlier article I wrote on the platforms in 2014.  This doesn’t take into account any rebalancing or tax benefits but just a ballpark look at performance.  I didn’t go through the Vanguard/Schwab questionnaires but they should be similar.

First, a look at broad market ETFs and performance: 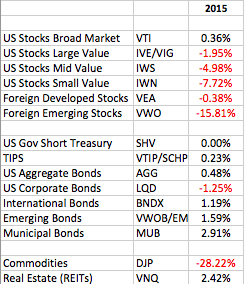 And below is the performance of the various allocations of the portfolios. They all likely lost money in 2015, but that shouldn’t be a surprise in a year where most assets did poorly.

What is also not surprising is the reactions on social media about the performance.  People flip out about being down 5 or 10% don’t understand these portfolios have lost 30 to 50% historically!

I think this feature will be an interesting challenge for the robos in the first big bear market in US stocks, whenever that may happen.  Accounts will start to leave at -20% if conversations in the industry is any indication, and without someone to talk to, will be interesting to see if the robos can weather that storm. I’ve always said the biggest benefit of a traditional advisor is being a coach, and they are worth their weight in gold if they can keep you from doing something really dumb.

The automated investment space has been a fun area to keep an eye on, and those that know me should stay tuned – more interesting developments to come!