I was chatting with a friend the other day and asked him why the gold stocks have gone nowhere for about 15 years despite gold performing “ok”. (I think my phrasing was “why are gold stocks such a dumpster fire?”)

He remarked that many gold companies are huge cash incinerators, and you really want to own the companies with producing mines where the CEOs are thoughtful with capital allocation and treat shareholders kindly.

Sort of reminds me of when Mark Twain supposedly said, “A gold mine is a hole in the ground owned by a liar.”

To which I responded, “well, I know a certain investment philosophy that likes to invest in companies that ooze cash flow, where management returns cash to shareholders and are not serial diluters… shareholder yield! I wonder if the strategy works to screen for miners too…”

This simple conversation set my mind down the wandering path towards the question of whether the shareholder yield approach works to select stocks in various sectors and industries.

For those unfamiliar, we wrote a book on the broad shareholder yield topic almost a decade ago, and it’s free here.

As a reminder, at its core, shareholder yield is simply ranking stocks by how much cash flow a company is distributing via dividends and NET buybacks. (Important to include the share issuance.) Focusing on just dividends or buybacks alone often can miss the bigger picture for a stock.

There are many variations on this theme, and we include valuation measures as well in our active strategies. Some additional factors can include debt paydown, quality metrics, etc etc.

And we also didn’t invent the idea. Many, many others have written at length on shareholder yield including Priest, Griffin, O’Shaughnessy, Buffett, and many others (see the book for more details as well as this white paper, webinar, video, and links below).

The thing is, anyone can devise a backtest that looks good. The key is “will it perform well in the future?”

I once heard someone describe me as “the King of Backtests”. The remark was supposed to be disparaging but I took it as a compliment!

The historical evidence for the shareholder yield strategy, to me, seems overwhelming vs. any market cap index or dividend income strategy we can find anywhere.

After publication of the book we launched a series of public strategies, now almost a decade old, that have performed great out of sample post publication. Not only in the United States but also in foreign developed and emerging markets.

So, it would reason that the strategy may work within sectors and industries too.

So, I rang up one of my very favorite quants, Jack Vogel over at Alpha Architect, and asked if he could assist. I consider myself a “quant light” whereas these guys are the real deal PhD heavy hitters.

I posed my theory with hopes he’d help out, and after enough pestering, he did!

So, back to the miners. Did it work? Does it work?

The high shareholder yield bucket (Jack tossed them into three fractiles) was 11.61% per year.  Nice!

The market cap weighted results confirm this outperformance as well. (Side note: academics like to call this weighting value weight, which always confuses the hell out of me and everyone else as they think you’re sorting on P/E ratios or something.) 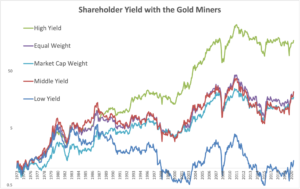 But does it work in other sectors and industries too?

For the 12 sectors, a high shareholder yield sort results in average outperformance of 2.91% over buy and hold. For market cap weight, the result is similar but lower at 2.22%.

The best part? It works in ALL 12 sectors. 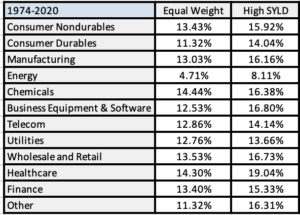 What if we go a little more granular and reduce it to 30 industries, surely it would not work in all of those? (Jack offered a warning here as you move to smaller subsets some of these groups would have had low stock numbers 50 years ago…)

It turns out it works in ALL 30. The result was even more pronounced here, where we saw a 3.35% outperformance for equal weight and 2.50% performance for market cap weighting.

Anyways, nothing earth shattering here, but given the fact that most all investors do not use a shareholder yield methodology, we thought it would be useful to pass along the research. Particularly now, as the market seems to be rotating away from high priced stocks to high quality value ones.

As you think about ways to sort the stocks you buy, perhaps a common sense approach where you pick cash flowing companies that return the cash to shareholders as a viable choice….

Now, did I tell you about this new mining project I heard about up in British Columbia…..?