One of the best takeaways from this paper, Buffett’s Alpha,  is the realization that the best performing mutual fund OR stock over long periods only clocked in at a Sharpe ratio of around 0.76.  If you’ve read a lot of our old posts you would know that is something we have been chatting about but still most investors get dazzled with claims of Sharpe ratios of 1, 2, or even higher (ahem options selling funds).  Here is a post we did in 2009 called Where Have All the Sharpe Ratios (Over 1) Gone?

As a follow up to our earlier post “Let’s Talk About Professional Funds“, here is a great graphic from the guys at BlackStar showing the unsustainability of a Sharpe Ratio over 1 for longer than short periods of time (and this is for CTAs that still exist!!)  : 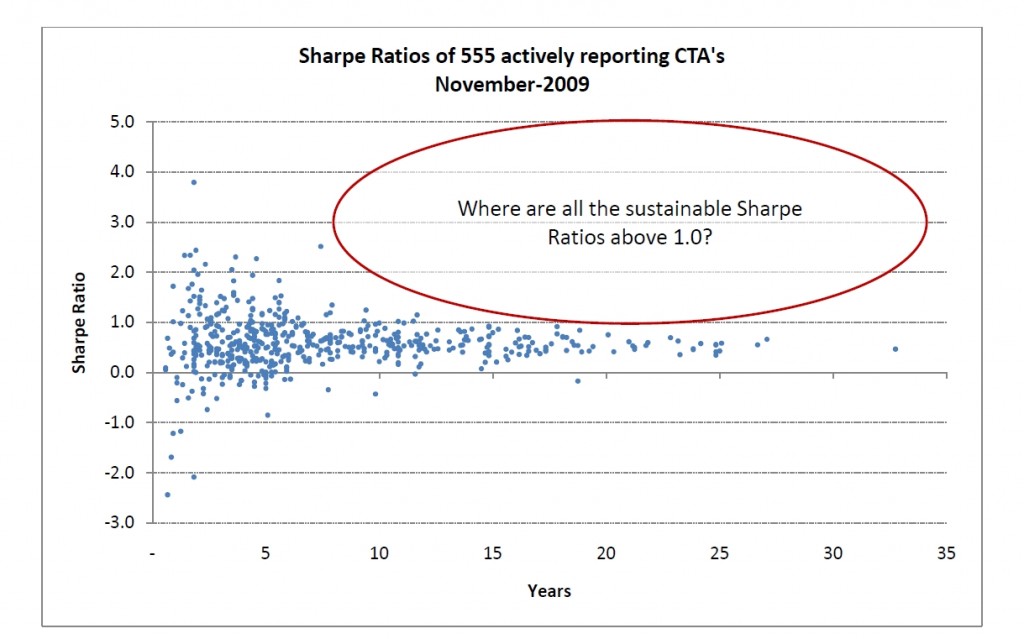 Likewise, Wes Gray did a fun post on the difficulty of sustaining big returns (reposted here from 10/2011):

I like reading Joel Greenblatt’s books, and there is a nice summary from the recent VIC where Greenblatt presented here (referring to Tilson’s Value Investing Congress, different than Greenblatt’s Value Investing Club (recent post here) which is confusing since Greenblatt is speaking at Tilson’s).  I often see references to Greenblatt’s Gotham Capital returns over 20 years – 40% a year.  If true, those are some of the best returns in the history of markets.  Indeed, an investor in his fund would have seen returns of almost two orders of magnitude above his initial investment.  ie assuming the fund was started at a reasonable $10mln, after 20 years it would be worth $8.4 BILLION.  That is without any withdrawls or additions of course.  Although my best guess is that the fund was small, existed largely during the go-go ’80s and ’90s, maybe used a little leverage, and paid out regular distributions.  Regardless, those are awesome numbers.

To see just how difficult that is check out the great blog post by my buddy Wes at Turnkey Analyst: Mission Impossible:  Beating the Market Over Long Periods of Time.  (Also lots in the blog archives on the difficulty of sustaining alpha returns…)

From the Turnkey Analyst Blog:

Before I even begin, here are some findings (I use the CRSP return database which starts January 1, 1926 and runs through December 31, 2010):

What is really interesting to me is that often the great investment approaches seem so obvious in retrospect.  Buffett has one of the best track records ever by buying cheap, safe, high quality stocks in a structure that allows for sub Tbill leverage.  But the key is that he came to this realization before most.  Ditto for the top endowments like Harvard and Yale and their extreme diversification – it is quite obvious now, but they were pioneering these concepts decades ago.  The pioneering trendfollowers and managed futures shops caught onto an idea long before computers made it simple, as did Bogle (indexing), and DFA (quant multifactor).

The question is, what will seem obvious 10, or 20 years from now?