I used to write about the top college endowments quite a bit – turn back seven years and my first book was on the topic – The Ivy Portfolio.  So when Harvard recently made news by announcing returns for the $36 billion endowment were a disappointing -2% in fiscal year 2016, I thought we’d revisit the topic.  (Endowment fiscal year ends each year in June – annual report here.)

The Harvard Crimson responded to this negative year with an article titled “The Urgency of the Present: Sub-par endowment returns are one of the greatest threats to Harvard today“.

Below are a few excerpts with my bolding:

Let’s not mince words: this is unacceptable.

As crass as it might be to say, money makes Harvard go round. We are a nonprofit institution of higher learning, but educating young people is expensive. Paying professors is expensive; maintaining dorms is expensive; funding research is expensive. As we stated this spring, 35 percent of the University budget is funded by the endowment. Far from a pot of gold in the sky, the endowment and its performance have tangible effects on University life and activities.

Now let’s rewind a few years back to 2011 when Harvard printed a 21.4% return, The Crimson complained how unfair the salaries of the HMC staff were. Some more excerpts from the opinion column:

Must our endowment really continue to grow larger and larger just to help sustain financial aid and House upkeep? Providing exceptional financial aid should not necessitate continual and exponential growth of Harvard’s endowment.

If we acknowledge that Harvard’s endowment is not a Wall Street hedge fund—if we are willing to accept a slightly lower rate of return on investment for the sake of social justice—then we must be consistent. Twenty-two percent returns cannot justify $8 million salaries.

As an investment manager this feels all too familiar. (I originally was going to call this piece “The Harvard Crimson Should Enroll in Investing 101” but thought that sounded a little harsh.)

When times are bad, and Harvard’s performance was below its benchmarks and peers – HMC gets hammered for underperforming.  A 2% loss is “unacceptable”.  Let’s ignore the fact that the endowment time horizon is supposed to be 100+ years, and never mind the fact that a 2% loss wouldn’t even rank in the top 5 losses since 1985, including the whopper -27.3% loss in 2009.

On the other hand, when times are good, and Harvard is outperfoming its benchmarks and peers – the managers get pummeled for getting paid too much.  Now, with public institutions this is a tough situation – a non profit that has 180 to 1 wage disparity is an easy target for scorn (let’s ignore those pesky college football coaches for a minute).

Here’s a graphic comparing Harvard’s performance to a basic 60/40: 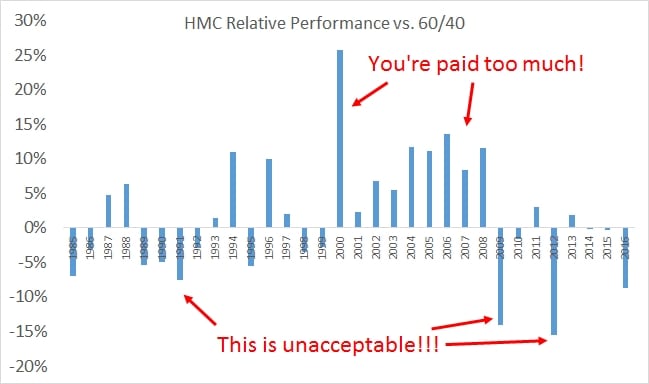 The mismatch between a money manager like HMC, and students/professors/alumni is not too different from challenges any financial advisor faces with their clients.  There is often a major information gap between the people managing the money and the clients they serve (which isn’t necessarily the client’s fault).  And often even the informed institutional investors fall prey to the same human emotions that mess up chances of investment success.

If you’re going to be an active manager, the whole point is to be different. Any investment approach will have years of under and outperformance.  We examined how’s Buffett’s stock picks, despite beating the market by 5% a year since 2000 and outperforming 98% of all mutual funds, would have underperformed the market 8 of the past 10 years.  Most can’t accept multiple losing years – here is a chart from State Street depicting 89 to 99% of institutions would fire a manager after two years of underperformance.  Two years!

So much of Buffett’s alpha is not his investment approach, which is of course sound, but the fact he sticks to his model of value investing over long periods.  To outperform you have to be different, which unfortunately means some years of losing- even many multiple years in a row of losing.

When there is a mismatch between client expectations and portfolio returns you literally have an un-winnable solution. Now that we are in the third longest bull market ever, many investors are expecting 10%+ returns.  Is that likely? (No.)  This is one reason Harvard has seen a revolving door for CIO duties (update: HMC just hired a new CEO today). So what is a person or institution to do?

One one hand you do what Yale does, which is get everyone on board with the same mission.  Students/alums/money managers all seem to be on the same page for what their goals and purpose is, targeting outperformance over long periods with an active investment approach.  This is easier to do if you have an informed client and great past results, but sometimes that is impossible due to many conflicting forces.

If you cannot exist in a structure where an active approach is possible, a passive rules based approach is another solution.  We chatted a bit about this when we wrote the article “Should CalPERS be Managed by a Robot?”

We’ve outlined numerous times how a basic global market portfolio is a nice diversified system that literally just owns the entire world across stocks, bonds, and real assets.  Below is a chart of the yearly returns for the two big endowments, plus US stocks, 60/40, and the global market portfolio from my book (labelled GAA).  (Download the free book here.) 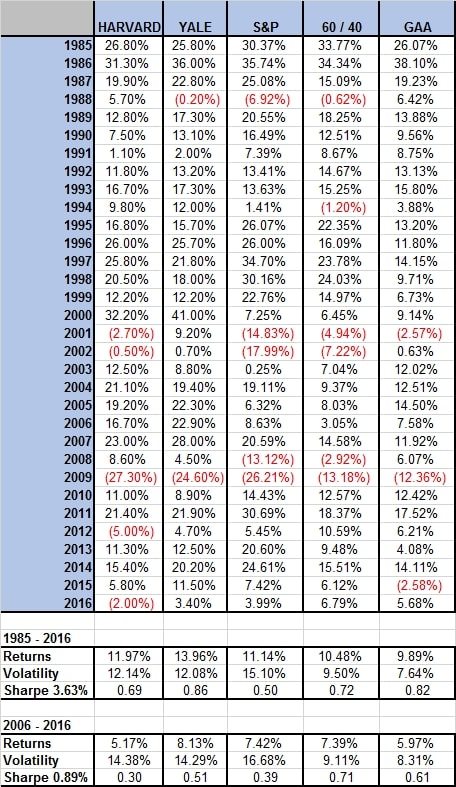 You can see that the GAA portfolio does an admirable job or capturing returns with low volatility and a endowment like Sharpe ratio.  (Also note just how dominant 60/40 has been, and with US stocks being expensive and bonds yielding 1.6% we don’t expect that to continue.)

We don’t tackle it here, but if you use some basic tilts like value and momentum, you can increase the returns of the basic allocation by an additional amount (we call it GAA+) as talked about in our white paper “The Trinity Portfolio“.  (In fact, if you use some leverage you can replicate the Yale returns with these basic GAA style portfolios.  We chatted with this a bit with my bud Pete Mladina on the podcast.)

So, Harvard, when you are ready to implement an automated portfolio system, let me know and we’ll get you setup on the Cambria Digital Advisor…

Some more yearly return charts of the various funds and indexes…. 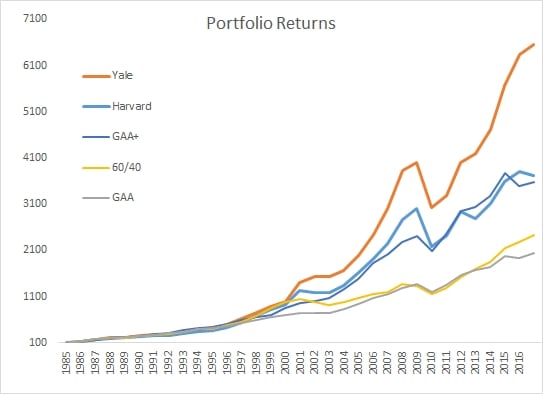 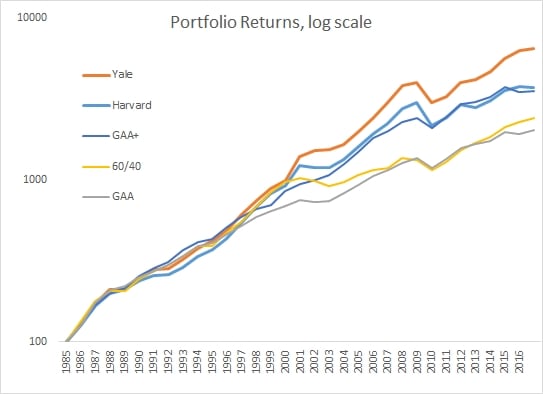