Most of you reading this are old enough to remember the Beech-Nut fake apple juice scandal in the 1980s.  (I’m not, but Jeff wrote the intro and he’s a couple years older than me…)

In short, Beech-Nut was marketing “100% apple juice” yet its product didn’t quite make good on this claim. Not only did the drink not consist of 100% apple juice, it actually contained 0% apple juice. Instead, it was loaded with beet sugar, corn sugar, and a few other non-apple ingredients.

Until the curtain was pulled back, customers bought countless bottles of healthy “apple juice,” not realizing they were guzzling down something decidedly different.

There’s a similar dynamic (though not as egregious) happening today in the investing world. Certain funds are marketing 100% apple juice, so to speak, yet selling a product that’s definitely not 100% apple juice.

I’m talking about the problem of “closet indexing.” To help explain this, let me quickly back up…

In recent years, one of the hottest investing trends has been “smart beta” or factor investing. To make sure we’re all on the same page, this style of investing attempts to identify and invest in specific attributes that historically have been associated with higher returns.

So rather than an investor buying a broadly-diversified fund or a market-cap weighted fund, he might look to concentrate his investment with a smart beta approach, targeting, for instance, only “value (cheap stocks)”, or size (all small caps),” or “low volatility.” These smart beta funds have become incredibly popular with investors.

But what if these investors weren’t buying what they believed they were? What if it wasn’t really 100% apple juice?

Enter “closet indexing,” the beet sugar of the investing world.

Paying for One Thing, Buying Another

With closet indexing, a fund that purports to be “different” in some way (pick your favorite smart beta style) is actually all but tracking a market cap weighted index. This means investors aren’t getting the concentrated exposure they’re being sold.

That’s bad, but it gets worse…

When you have an actively managed fund claiming to add value through the selection process of a talented fund manager, or strict rules-based criteria, do you think the powers that be will want to charge more or less for this fund?

Obviously more. After all, these funds are being marketed as being “different” than the standard white vanilla indexes. This difference should come at a premium price, right?

But with closet indexing, the unfortunate reality is many investors are buying something that resembles a vanilla index far more closely than their desired factor – yet they’re paying higher fees based on this alleged factor-value-add. Paying for filet, but getting bologna.   In some cases, the fund companies don’t even hide in the closet, it’s even worse than that.  They tell you they’re tracking the same index and charge you way more…

I did a very quick search for some other offenders, and wow this list is bad.  These 10 funds all track the S&P 500 Index, which as a reminder you can get for 0.05%, and on average charge 1.31%. Even more embarrassing, these are not no-name fund companies, but rather the who’s who of the investment space.

To be fair to these fund companies, if there is such a thing, these are the C share classes that get sold to investors.  The “institutional” share classes are a more reasonable 0.55%, but realize that is still 10x the cost of SPY. 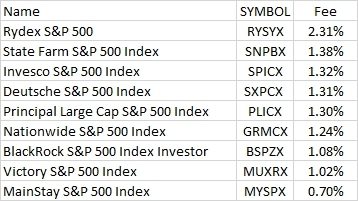 Stepping back, the summary is really quite simple:

If you want market beta, then buy a low-cost fund (mutual fund or ETF). But if you want to try for alpha, then buy a fund that is truly DIFFERENT.  And by different, the more different from the index the better.

(By the way, the investment jargon for this is “active share.” It’s the measure of the percentage of a fund that differs from its benchmark index.)

I can hear the naysayers already… “Thanks, Meb, but we already know this. The challenge is how to identify which funds are apple juice and which ones are beet sugar.”

Fair enough. Let me point you toward some tools to help.

First, here’s a resource from The Wall Street Journal that compares many popular funds to their most similar benchmark, then identifies the percentage of the portfolio that differs from the benchmark.

Second, here’s a link to Active Share, which enables you to type in a fund ticker then immediately determine its active share.

(If you can’t get enough of the research on the topic, here are some additional great articles for you: Alpha Architect, Jason Zweig, Jake at Econompic, Patrick O’Shaugnessy, and a broad summary)

Now, most investors understand this concept as applied to ETFs and mutual funds.  But far too many investors stop there, failing to apply it to their entire portfolio.

Most allocators have been seduced by the religion of “asset allocation is the most important driver of portfolio returns.” To avoid a misunderstanding, I don’t dispute this idea – however, over a long-term investment horizon, most diversified global asset allocations end up with largely similar returns. This means most allocations should come with the same fee. But do they? More on that in a moment…

In my book, Global Asset Allocation, I studied the asset allocation portfolio returns of some of the brightest minds in investing, including Warren Buffett, Ray Dalio, and El-Erian. We examined the performance of these investors and their asset allocation models from 1973-2013.

Now, what if you had been told that one of these asset allocations was truly superior, and deserving of a high-dollar portfolio management fee? What if the glossy marketing materials had sold you on the belief that Allocation XYZ was truly outstanding, way better than the others, and was worthy of that 2ish% management fee?

Well, you would have seen your returns gutted.

In my book, after examining the different allocation returns, I then looked at the effects of fees on those returns by posing a hypothetical: Starting in 1973, what if we could have taken what would end up being the best performing portfolio strategy over the next 40 years, (El-Erian’s), yet implemented it with average mutual fund fee of 1.25% and average advisor expenses of 1% tacked on?

The takeaway? Those fees transformed El-Erian’s best performing asset allocation into lower than the worst out of all the strategies included in my study.

In other words, all the alpha attributable from whatever “active share” El-Erian actually provided was completely eviscerated by high fees.

Yet again, we see overall similarities in returns despite the various trumpeted differences in allocations, and despite a range of fees.

But what are you focusing on the most? Your allocation or your fees?  We wrote about this in “The Cheapest Portfolio in the World“.

About nine years ago our good friend Matt Hougan wrote an article called “The World’s Cheapest ETF Portfolio”.  He outlined a portfolio with the following allocation:

It weighed in at a super cheap 16 basis points!  The following years have seen fees continue to decline.  This fund allocation above would now cost an investor a bargain basement 9 basis points!  (Only problem with these is they are market cap weighted, which we’ve talked about as being suboptimal.)

That is a pretty awesome decline.  But as Cliff Asness stated a month ago on Twitter:

We live in a world of incredible investment choices, where there are lots of great choices to implement global portfolios.

For example, there are 5 global asset allocation ETFs that charge 0.25% or less (my company Cambria manages one).  That’s awesome! The below chart demonstrates this concept. Pretty cool right?  They manage about $2 billion in assets.

You can also invest in a automated investment solution like a digital roboadvisor, many of which can get you a portfolio with no trading commissions and a total expense ratio of about 0.5%.  Still awesome!

What’s not awesome? Most investors aren’t particularly fee conscious.  Here is an excerpt from an old post:

The slice of the pie for the low fee ETFs is so small that you cannot even see it on the chart.  How much extra is Wall Street siphoning off from your wallet vs. the low fee ETF option? $8 billion dollars a year.  That is an extra 0.83% per year you are giving to mutual fund managers.

Oh, and by the way, 71% of these mutual fund managers have $0 invested in their own fund.  Maybe there is a reason for that?

Bottom line: Too many investors have it wrong. They’re being duped into believing that a few allocation differences will have some dramatic effect on long-term returns…all the while, not realizing that the slight long-term differences in various portfolio returns are totally offset by hefty fees.

Investors could buy a handle of asset allocation ETFs for less than 0.30% all-in. On the other hand, investors could pay more than 1% – or even 2% – for the same thing!

Who do you think will have more dollars in their account in 20 years?

(By the way, this applies to institutions too, Should Harvard’s Endowment Be Managed By A Robot?, Institutional Investors Are Delusional, Which Institution Has The Best Asset Allocation Model?)

Like I’ve said a million times, all that matters is total return after all fees and taxes.  If you’re buying beta (a commoditized index like the S&P 500) you should pay as little as possible.  You can justify paying more for potential alpha, but you better make sure they are not just a closet indexer and at least give you the chance to outperform.

So whether on a micro level, analyzing the active share of a potential ETF investment, or on a macro scale, wondering whether a portfolio management fee will justify itself through that allocation’s long-term returns, don’t be fooled…

Know what you’re buying, know how much you’re paying, and don’t pay for a filet, and get bologna.